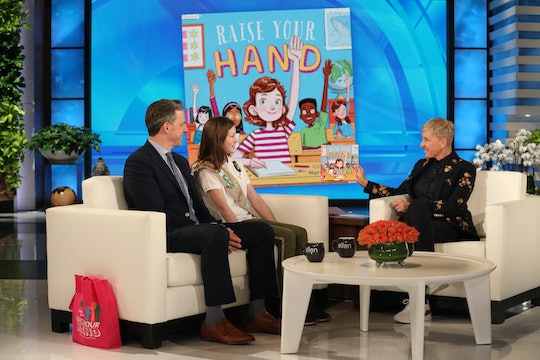 Most people know Jake Tapper as a CNN host and political commentator. Rarely do they get to see him as a parent to his two kids — but rest assured he is raising them right. During an episode of The Ellen Show, on Friday, fans found out that Jake Tapper's daughter wrote a book called Raise Your Hand, which is meant to encourage girls everywhere to speak up. How awesome is that?

On Friday, Tapper paid a visit to The Ellen Show where he had fun interrupting the show's host, Ellen Degeneres, with breaking news (in true newscaster fashion) and talked about President Trump's tweets (spoiler alert: he doesn't agree with all of them). But Tapper was also there to talk about his 11-year-old daughter, Alice, who he calls "the better Tapper." At her young age, Alice has already started a movement to motivate other girls her age to speak up and raise their hands.

"I noticed that one day, when I kinda knew the answer to a question that the teacher asked me, all the boys were raising their hand and all the girls were sitting quietly," Alice said.

Alice decided to write a book inspired by this moment in her life, aptly titled Raise Your Hand. The book not only aims to inspire other girls to speak up and not accept the status quo, but aims to help them, too. All of the proceeds from the book (which is in stores next week on March 26) will be donated to Girl Scout's Nation's Capital (where Alice is a Girl Scout).

How incredible is that?

But this isn't the first time that Alice has shown that she is making a change. In 2017, Alice helped create a Girl Scout patch for troops nation wide, according to Fortune. In order to earn the patch, girls must pledge to raise their hand in class and recruit three other girls to do the same. That same year, Alice penned an op-ed for the New York Times about raising her hand, which was the basis for her picture book. In the op-ed, Alice urged others to raise their hand and conquer their shyness.

"People say girls have to be 90 percent confident before we raise our hands, but boys just raise their hands," Alice wrote. "I tell girls that we should take the risk and try anyway just like the boys do. If the answer is wrong, it's not the end of the world. It's not like answering a trivia question to win a million dollars on live TV."

She has a point. And since most girls her age aren't reading the New York Times, her book has the ability to reach so many people like herself. Learning how to be confident and speak up is a lesson that any young person can take to heart.

Although Tapper may report the news, Alice is the one who could be making the news in the future (I mean, she already is). Tapper interviewed his children for Men's Health in February, and Alice told him that while she doesn't necessarily watch the news (or her dad on the news), she does keep up with the headlines that affect her.

"I listen to whatever you and Mom say, and when something big happens, I either get mad or happy or sad," she said.

This passion is the exact thing that will create future leaders. And Alice is pretty much on her way to becoming a future leader, thanks to her contributions for inspiring others to speak up.