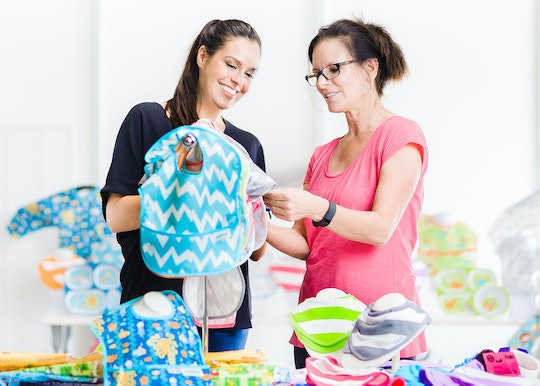 Jakki Liberman's roles as a mother and entrepreneur can easily fall in line with the old adage: "Where there's a will, there's a way." (Like most of us pulling double duty as mothers and, you know, people.) But she would be quick to shrug it off. After all, Liberman's never been one for navigating her life with the expectation of a smooth ride.

When her company, Bumkins, a children's product company that combines nostalgic parent-approved designs with functionality (like a teething ring in the shape of a Nintendo Gameboy) was in its infancy, the then-35-year-old mother was faced with divorce and a bankruptcy, the result of her husband not being completely transparent with their finances. She quickly found herself as a single mom, raising four children under the age of 9, while also working to maintain her fledgling business. Resolute to carry on, Liberman moved into a smaller house that she could more easily afford on her own and turned her garage into an office, where she and her small team ran Bumkins for more than a decade before moving to an office space.

Liberman and her husband began the company in 1989 after her daughter began having a skin reaction to disposable diapers. “Between trying to just lessen my impact of my existence — the trash we leave behind — and just seeking a more chemically-free experience, I began trying every diaper that was on the market,” she says. After discovering that there were no disposable diapers that met her requirements, she decided to create a cloth diaper that was not only functional, but stylish. “I liked solving problems, but also making them beautiful,” Liberman says. “It took me down this path of looking for practical fabrics that could be washed 200 to 300 times while staying bright. So upon finding and developing all of those components not only did I learn a lot, but I made a pretty awesome product.”

At the time, Liberman says people had just begun to take an interest in more natural alternatives, so the company found success. But when the early 1990s recession hit, “a lot of those people who had the luxury to think about the environment all of a sudden had no luxury,” she says.

“Even though cloth diapers save you a ton of money, you do have to buy them upfront,” Liberman says. “So for a lot of people, it just became a back burner issue and getting through the week was sort of the deal.”

The snag, of course, also came around the time of another bump in the road: Liberman’s divorce. But her innovative thinking for getting her personal life on track — downsizing and moving her business to her home — also came into play in her business.

“We began to realize that as much as we wanted to change the world from a cloth diaper perspective, we needed to expand beyond diapers if we were going to survive as a company,” she says. What Liberman and her team discovered was that many of the fabrics she had developed to be waterproof and durable for diapers also served a purpose as bibs, bags, “splat mats,” and even art smocks.

“It was incredible that all of a sudden I’m selling bibs and, guess what? Everyone knows how to use them, everyone needs them and it was just a lot easier [than selling cloth diapers],” she says, explaining that cloth diapers are more difficult to sell because there is a learning curve and initial monetary investment. “We found our growth by just being a little bit more mainstream in our product selection.”

During that time, Liberman and her team also launched a marketing aspect of the business — Jakki & Company — that allowed them to make more money by helping other people design and launch their products. All of those funds were filtered into creating new products for Bumkins and getting them into consumers’ hands.

“Both companies grew and it was another thing that made me feel a little crazy and pulled into too many directions,” Liberman says. “But on the other hand, I was also always so concerned that something would happen. For that reason, I liked to keep a lot of balls in the air.”

Liberman explains that when her marriage ended in bankruptcy, her ex-husband wasn’t able to provide child support. That meant that her self-described “floundering company” needed to make more money, so she sought opportunities to grow and guarantee more income. “I had a whole different need,” Liberman says of raising her four children while building a business. “It was not a luxury. I thought, ‘This has to work.’” She says while juggling motherhood and two businesses meant she had a full plate, that possibility of uncertainty kept her in motion.

“I didn’t want to have all of my eggs in one basket anyway,” Liberman says. “Those kinds of things left very big scars on me. I knew that I had more control of my future if I had more sources of income. If anything turned upside down, then I still had security.”

By the mid-2000s, Liberman says she began phasing out Jakki & Company to prioritize, focusing all of her energy and resources into Bumkins. “I stopped feeling like my world was going to fall apart.” Once the marketing business closed, she put all of her energy into Bumkins, expanding the business and continuing to grow the product line.

“Not that it was entirely a straight line,” she says. “But it was definitely easier to focus on one thing.”

Now, more than 25 years after its inception, Bumkins has a fully-stocked, award-winning product line, featuring Liberman’s original spark of inspiration — functional but fun material. The diapers, bibs, and bags feature popular Disney and DC Comics characters, as well as chic stripes and flowers.

In between that success, it sometimes meant showing up to work exhausted, learning business tactics along the way, and running into a meeting probably looking “like a wreck,” Liberman says, laughing. “You see your own flaws, while also seeing everyone else’s perfections,” she says. Liberman describes going to parent-teacher meetings and seeing happy couples with their kids, while thinking “I barely even got here.”

But she also remembers looking around and thinking — bumps, scars, and all — that she wouldn’t have it any other way. For Liberman, divorce meant choosing the way her kids were raised and discovering personal freedom.

“You are walking your own walk — and you are OK if you don’t fit into a particular type,” she says. “I realized you ‘should be doing’ could be met with ‘says who?’”