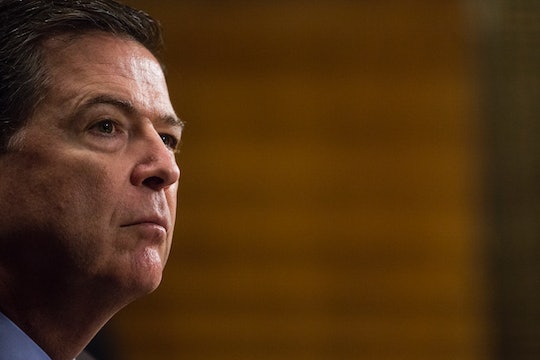 On Tuesday, President Donald Trump fired the director of the Federal Bureau of Investigation (FBI), James Comey. The president's decision came during an ongoing investigation by the FBI into the 2016 election, in which many believe Russia may have interfered. Further, there are accusations that advisers from within the Trump administration may have worked with Russia in some capacity, according to The New York Times. Keeping that in mind, James Comey's goodbye letter urges the FBI not to focus on Trump's firing of the former director, but rather, to focus on the continued protection of the American people — and the Constitution.

Comey, a native of New York, had been director of the FBI since 2013, and had formerly served as deputy attorney general at the Department of Justice, according to the FBI's official website. Comey's dismissal came after Attorney General Jeff Sessions recommended his firing to the president, saying that "a fresh start" was needed at the FBI. Shortly after the letter from Sessions was received by the president, Trump fired Comey via letter as well.

According to The Times and multiple other news outlets, the media announced Comey's firing before he had been formally notified. He was at the Los Angeles FBI field office giving a speech when the news of his firing broke, flashing across television screens inside that office that were turned to the news. At first, Comey reportedly thought it was a prank, but he was quickly whisked away by his staff.

Once his firing had been revealed to be legitimate, there was palpable shock and suspicion not just from within the Bureau, but for politicians and private citizens alike, according to The Guardian. On Thursday, a farewell letter Comey had written to agents at the FBI was obtained by CNN. It reads as follows:

To all: I have long believed that a President can fire an FBI Director for any reason, or for no reason at all. I'm not going to spend time on the decision or the way it was executed. I hope you won't either. It is done, and I will be fine, although I will miss you and the mission deeply.

I have said to you before that, in times of turbulence, the American people should see the FBI as a rock of competence, honesty, and independence. What makes leaving the FBI hard is the nature and quality of its people, who together make it that rock for America.

It is very hard to leave a group of people who are committed only to doing the right thing. My hope is that you will continue to live our values and the mission of protecting the American people and upholding the Constitution.If you do that, you too will be sad when you leave, and the American people will be safer.

Working with you has been one of the great joys of my life. Thank you for that gift.

Comey has reportedly been asked to testify before the Senate intelligence committee as a private citizen in a closed session to be held next week, according to PBS News Hour. The investigation into Russia's potential involvement in the 2016 election is ongoing.