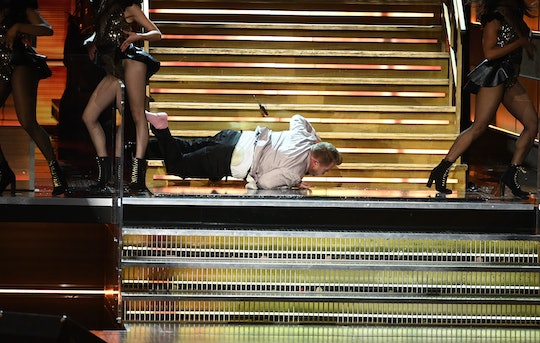 James Corden started off the 2017 Grammy Awards with a bang – one that quickly faded into a whimper. He was meant to slowly emerge from underneath the stage, but a manufactured gag had him getting stuck halfway to the surface, instead. Corden struggled to get out of his stalled lift and then took a major flop down the stairs, where he was left rumpled and without one of his shoes. Twitter's many immediate jokes and memes and jokes about Corden falling down the stairs at the Grammys, of course, are almost as hilarious as the tumble. Almost.

Corden's fall wasn't a real accident, thankfully; If it hadn't been planned, then he could have been pretty badly injured, which would have been an unfortunate (but memorable) start to the night. The fact that it was rehearsed means it's a little easier to laugh at all the memes about it, because Corden wasn't in any real physical danger. However, it was still a pretty hard fall and he carried it off like a pro, immediately launching into the rest of his opening monologue, which consisted of a rap rife with some hilarious name-dropping moments. But as fun as the rap was, the flop was the real star of the show.

How Much Did They Pay Him?

The real reward is earning a laugh for his antics, obviously.

Not Everyone Was Worried

While some viewers were concerned about the fall, other people got over those concerns just fine.

Stumbling during an important moment – like, say, hosting an award show – is the thing nightmares are made of, but Corden faced those fears head on.

It's A Solid Pun

When you see the opportunity for a pun, you take it.

A few viewers even saw themselves reflected in Corden's unfortunate stumble.

A Little Too Relatable

In fact, his fall seemed to be a metaphor for life in general.

The bit did seem to go on for a while.

If one image sticks with you from the 2017 Grammys, let it be this one.

The Grammys offered more than one reason to tune in.

His Fall Said It All

It was simply too easy to identify with Corden's fall down the stairs, no matter what it represented to you personally.

For some fans, Corden perfectly captured their mood in one tumble.

It isn't a good evening out until you take at least one spill, right?

Last year wasn't a fun one, but 2017 might be off to an equally rocky start.

Stairs Can Be Difficult

Especially after you've had a few drinks.

I Don't Know If They Give Grammys For That

Physical comedy is definitely a talent, but not one that they honor at this particular awards show.

Everyone Gets Stuck Sometimes

Everyone has experienced the feeling of being stuck, but Corden actually lived through it.

While reactions ran the gamut, it seemed like most viewers watching his opening monologue came out of it respecting Corden's commitment to doing whatever it took for a laugh.