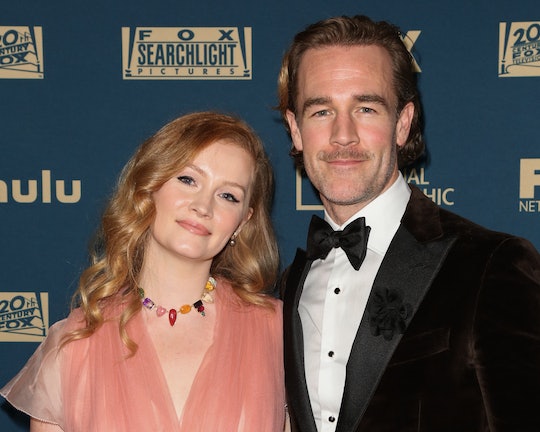 Roughly a month after announcing they were expecting their sixth child, James Van Der Beek revealed that his wife Kimberly suffered a miscarriage recently. While she seems to be doing well now, the actor shared that it's been a very difficult time for the family. And now that Kimberly is on the mend, the couple is "grieving and counting [their] blessings today."

Van Der Beek and Kimberly share five children — Gwendolyn, 16 months, Emilia, 3, Annabel Leah, 5, Joshua, 7, and Olivia, 9 — and announced the pregnancy back in October. The Dawson's Creek alum and current Dancing With The Stars participant shared the heartbreaking news both on air during Monday's episode and on Instagram.

"My wife Kimberly and I went through every expecting parent’s worst nightmare. We lost the baby," he said during the show. "The little soul that we had expected to welcome into our family took a shortcut to whatever lies beyond. You never know why these things happen, that’s what I’ve been telling my kids. All you know is that it brings you closer together, it breaks you open, it opens up your heart, it deepens your appreciation. It makes you more human.”

Van Der Beek went on to admit that he hadn't planned to dance that night, but Kimberly pushed him to keep going — something that he emotionally thanked her for. “Kimberly, I love you," he said before the judges scored his performance. "Thank you for pushing me out on that dance floor. Thank you for everything you do. I don’t know how you do it. Five kids. You’re amazing.”

The star echoed many of the same sentiments in a heartbreaking Instagram post about the miscarriage. "Wrecked. Devastated. In shock," he wrote. "... We’ve been through this before, but never this late in the pregnancy, and never accompanied by such a scary, horrific threat to @vanderkimberly and her well-being." He continued to say that she's now recovering and to thank all of their friends and co-workers for their support. "As many of you have said, 'There are no words...' and it’s true. Which is why in a time like this it’s enough to know that you’re there. Grieving AND counting our blessings today."

After the show, Van Der Beek spoke with People about how to survive such a loss. Along with the support of friends and family, he suggested that people just let themselves go through it. "The only advice I have is that you can’t reason your way out of it and you can’t talk your way out of it," he told the magazine. "You just have to let yourself go through it and go through the journey and be there for each other."

This isn't his family's first time losing a baby and they know a thing or two about the emotional process that comes with it. "Know that you can’t judge the pain, you can’t judge the process," he told People. "For us, thankfully, we also have three rainbow babies. It’s life. And also, don’t be afraid to talk about [it]. There’s a weird stigma that might still exist around it … things like that is when you need your family and friends."

Thankfully, Kimberly is on the mend and it sounds like they have quite the support system to see them through.