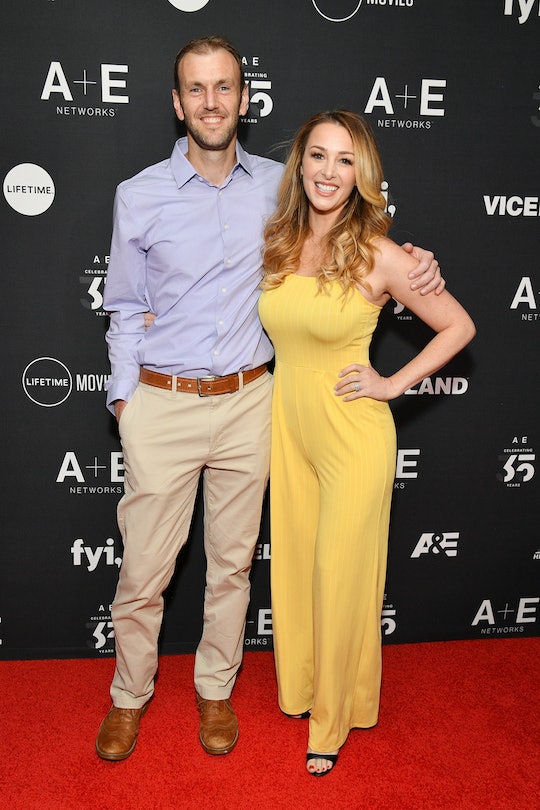 Fans of Married At First Sight's Doug Hehner and Jamie Otis were thrilled to learn that the pair are expecting their second child. The amount of joy among supporters is especially high because the pregnancy comes after multiple miscarriages. So it's probably safe to say people are eager to see Jamie Otis' first bump photo, which reveals the reality star is enjoying every bit of her second pregnancy, including the not-so-glamorous parts.

As a refresher, Doug and Jamie met in March 2014 literally at their wedding, thanks to the reality show, Married At First Sight. The series, in case you didn't know already, features pairs of strangers who wed at the altar after being set up by relationship experts. And although the reality stars were nervous about marrying a complete stranger, they trusted the experts who matched them and went forward with the ceremony.

Of course, it took some time for Hehner and Otis to establish friendship and trust before eventually falling for each other. But fast-forward to today, and the couple is still happily married. That isn't to say their marriage hasn't been without its difficulties, however.

In 2016, Jamie suffered a miscarriage 17 weeks into her pregnancy. She delivered a stillborn son, whom they named Johnathan. Hehner and Otis went on to welcome their daughter, Henley Grace, in August 2017. Unfortunately, though, Jamie suffered two more miscarriages after Henley was born. One in September 2018 just days after celebrating a positive pregnancy test on Instagram, and a miscarriage in January 2019.

As you can imagine, the couple's Instagram followers were over-the-moon when Hehner and Otis revealed on Sept. 7 that baby number two is on the way. "We went to the fertility specialist and found out WE ARE PREGNANT!!! I cannot even believe it!" Otis captioned a photo of herself and Doug holding up a sonogram.

She continued, "After 18 long, painful months, two losses and negative after negative on the pregnancy tests we are *finally* pregnant again! Of course I am being cautiously optimistic, but I have a feeling this little one is going to stick".

Then on Monday, Sept. 9, the expecting mama took to Instagram again. But this time, she shared her first official bump photo and a long message about loving every detail about being pregnant, including the uncomfortable symptoms.

"Here we GROW again!" she captioned a post featuring her bump alongside 2-year-old Henley. "I’m *finally* beginning to feel pregnant! The fatigue has hit like a ton of bricks, my boobs hurt, & I’ve had mild cramps & a back ache that was never there with any of my previous pregnancies."

Otis went on to share that, although she has been dealing with insomnia, she hasn't been feeling nauseous or has been throwing up.

"I am genuinely *SO THANKFUL* for all these symptoms bc that means this little poppy seed—or seeds— are growing!" she added, in reference to her elevated progesterone and HCG levels (and possibility of twins) shown by recent blood work. "September 12th is my next visit with the fertility specialist and I AM READY FOR IT! Can’t wait to find out more info on this babe/babies & of course we will be sharing with you."

Fans gave Otis all the love in response to her first bump post. One follower commented, "This is BRAVE. You are FIERCE. This gives me all the faith in the world I would be so nervous (which I know you are) but I commend AND congratulate you, and wish you all the best! God bless your family and the new baby to come."

Meanwhile, Bachelor alum Ali Fedotowsky wrote, "Congratulations! I know it’s been challenging and your journey has had many ups and downs. Know we are all here for you!"

Congrats aside, those who looked closely at this post probably noticed the "Due in May" caption at the bottom left corner of Otis' image. If you do the math (and if Otis was four weeks along on the dot on Sunday) then that puts her due date on May 17.

Congrats again to Doug Hehner and Jamie Otis on the impending arrival of their little one! I can't wait to follow your family's journey.