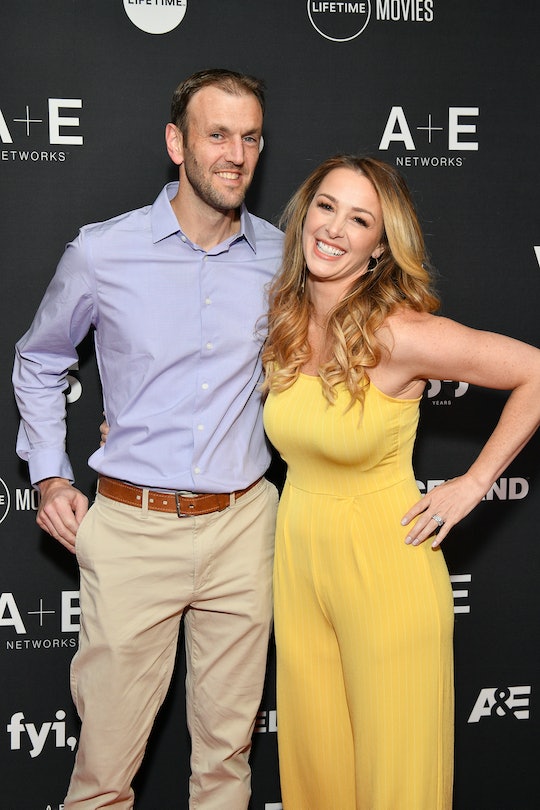 Taking a pregnancy test when you've been trying to conceive can be nerve-wracking. Not to mention exhilarating and terrifying all at the same time. You're hoping for that plus sign or that second line, of course. But oftentimes, if you're peeing on that stick a little too early, the result isn't as obvious as you might think. "Wait, is that the start of a second line?" plenty of couples have debated through the years. Which is why Jamie Otis and her husband taking a pregnancy test are every couple TTC.

But first, let's make sure you're up to speed. If you're not familiar with Jamie Otis and Doug Hehner, they met — and then immediately exchanged wedding vows — on Married at First Sight back in 2014. The couple suffered a miscarriage four months into Otis' pregnancy in 2016. (They named this son Johnathan.) They went on to welcome a daughter, Henley Grace, in August 2017. In September 2019, Otis experienced a chemical pregnancy, according to E! Online. And then in January 2019, Otis and Hehner revealed that Otis had another miscarriage — this time, at 10 weeks along.

Since then, the couple has remained open with their fans and Instagram followers about their infertility journey. Which is why I'm sure Instagram users were excited to see a new post featuring Otis holding a pregnancy test.

On Saturday, June 15, Otis took to Instagram to share a nearly-5-minute video with her followers. "Period’s a day late🙏🏻 I took pregnancy test in #NYC🤰🏼 #ttc#hopefulI think I’m beginning to see things.🤦🏻‍♀️ Anyone who has been #ttc will probably get this," she captioned the post. "Anyone else will just think I’m crazy. But I could’ve swore I saw a line on that pregnancy test.🤷🏻‍♀️"

In the video, she explains that her period is a day late. So she decided to buy a pregnancy test at a drug store while visiting NYC with her family — and then used a restaurant bathroom to take it. "I swear I saw a plus sign. But Doug, do you think?" Otis says to her husband while showing him the test.

"I don't see it," he replies decidedly. Because of course.

"I mean, I think it's ... I literally had just peed ... I saw a little bit of a line. But I don't really see it either. But I'm going to take another test tomorrow. It would be the best birthday present ever. Can you imagine? Tomorrow's my birthday."

"And Father's Day," Doug points out.

Later on in the video, however, Otis gives an update on the situation. "At a rest stop heading home, and I couldn't wait, so I took another test. And it's really negative," she explains, noting that she also started her period.

"We won’t give up hope!" Otis wrote on her Instagram post. "We will get pregnant SOON & it’ll be a healthy pregnancy!🙏🏻🤰🏼 *throwin’ that out into the universe*✨ #ttc#hope#tryingtoconceive#infertility#thestruggleisreal."

Despite their struggle with infertility, Otis has remained hopeful that they will soon be adding another little one to their family. “I have the best husband and the most amazing daughter, and I believe we will be pregnant again soon," she told her Instagram followers in April, according to Us Weekly.

My husband and I tried conceive our fourth child for seven months before it finally happened. And you can bet I hawked over the calendar, and started taking tests the second my period was late. It was disappointing month after month to see that big, fat negative — and one month, I swore I saw a very faint second pink line. Unless I had a super early chemical pregnancy, though, it was only wishful thinking.

With that said, when I eventually did get an obviously positive pregnancy test, I could still see the second line way before my husband could. Which begs the question: What is it with guys and their inability to see faint pregnancy test lines?

In all seriousness, though, those big fat negatives after getting what appears to be a line can be incredibly discouraging. Here's to wishing Jamie Otis and Doug Hehner plenty of baby dust for next month as they continue to TTC.