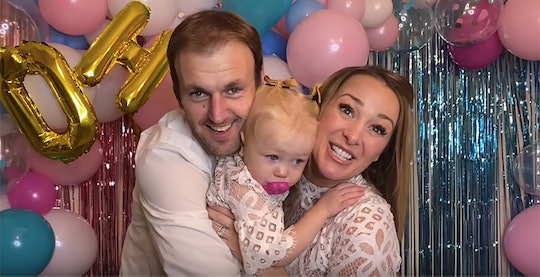 Jamie Otis and Doug Hehner have a lot to be grateful for this Thanksgiving. That's because Otis and Hehner are expecting baby number two after a series of losses, finally achieving their dream of growing a big family. As if this isn't exciting enough, Jamie Otis revealed the sex of their rainbow baby Monday via an adorable family video. Even the couple's 2-year-old girl, Henley, made a cameo.

Last week, Otis teased baby number two's sex reveal was on the way, a promise she made good on Nov. 25 to the delight of her millions of fans. "We FINALLY get to share with you the gender of baby number two!" Otis captioned the video, which has since received almost 18,000 views as of Monday. "Yesterday was absolutely amazing and we are so excited to share this video with you. Thank you for all your love and support for us and our family on this journey. It means the world to us!"

As for the sex reveal itself, the couple cracked blue and pink eggs onto their foreheads with the help of Henley. Their entire family was there watching while they broke the eggs, adding another layer of excitement to the reveal.

Although Henley was a great helper throughout the whole thing, she didn't want to crack one of the blue eggs. This proved to be an interesting detail later, as this egg was the one with yolk. Yep, Otis and Hehner are expecting a BOY!

“Doug instantly cried tears of joy. Our first baby was a boy, but we lost him at 17 weeks," Otis shared with People. Of course he loves our daughter, but he’s wanted a baby boy so badly for so long. This is truly an answered prayer for us."

In case you didn't know already, Otis is referring to the couple's son, Jonathan Edward, who the couple lost in 2016. “I never, in my wildest dreams, would’ve envisioned that I would be delivering a 17-week-old baby who went immediately to be in heaven,” she said, according to People. “Not only did he go to heaven, but when we looked at him, he was perfectly formed — he had all 10 fingers, all 10 toes. He had a little button nose.”

Of course, Otis and Hehner are more preoccupied with baby number two being healthy above all else. “For me, I can honestly say I was and I am still just praying for a happy and healthy baby," Otis shared, according to People. I didn’t care if it was a boy or girl — please just stick and be healthy."

So congrats to Hehner and Otis on the impending arrival of their baby boy! And thanks for letting fans tag along on this special journey.