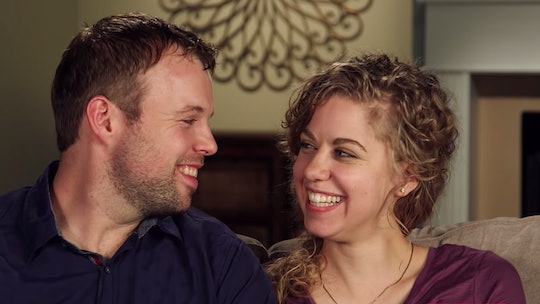 Fans of Counting On know the past year has been one of growing for the reality TV family — I'm talking baby boom level growth. After all, six new Duggars were born and the super-sized family can't enough of these cuties. Indeed, proud aunt Jana Duggar is totally in love with John-David and Abbie's newborn baby girl.

John David and Abbie welcomed their daughter, Grace Annette, on Jan. 7. “Our lives have changed forever with the arrival of our baby girl. She is a beautiful gift from God! We are so blessed the Lord has given her to us,” the proud new parents said in a joint statement on the Duggar family's website. “It’s still surreal to know that we are really parents, but it’s a great new adventure that we are excited to take on together!”

Given that John-David and Jana are twins, they've formed a particularly close bond through the years. And it seems this special relationship has extended to Abbie. In a December episode of Counting On, Abbie was the one who shared the pregnancy news with Jana. "I got you a birthday present,” Abbie told John-David's twin. “I got you a baby for your birthday! It’s due right on y’all’s birthday, that week.” (Ultimately, Gracie was born five days before John-David and Jana's Jan. 12 birthday. But still!)

Now that Abbie and John-David have welcomed baby Grace, it seems Jana has also formed an extra-special bond with her twin's daughter as well.

"Ever since John and I were little we've been asked if we have that 'twin thing.' You know, the thing where you feel what the other one is feeling or know what the other one is thinking," she wrote via Instagram on Jan. 12. "Well, John, I've always answered that with a no — but now I can honestly say that the day little Gracie was born I felt every bit of happiness that you did, so I guess it must be real! ... Being an aunt to your little girl is priceless."

On Saturday, Jan. 25, the doting aunt again took to Instagram. This time, Jana shared two photos — one of herself cradling a swaddled Gracie, and one of a closeup of only the snoozing baby. "Little Gracie! She's practically perfect in every way!" Jana captioned the post, alongside heart-eyed emojis.

So sweet! I mean, just look at the way Jana is beaming at her precious niece. It's obvious how absolutely smitten she is. Whenever John-David and Abbie want to slip away for a date night, I have a feeling Jana will be first in line volunteering to babysit for Gracie.