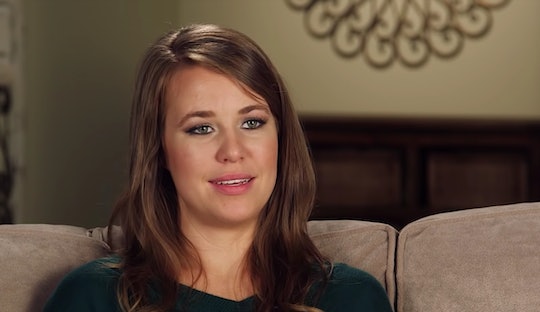 As fans of the Duggar family know, the 19 siblings have their own unique skills and talents, which are often documented on their TLC reality show, Counting On. They know how to cook, clean, fly planes, and be handy, which is likely thanks in part to growing up in a house with many siblings. With that said, fans of the show will love seeing oldest daughter Jana Duggar showing off her handy skills in this Counting On clip.

This new season of Counting On has focused on the Duggar siblings going through major things in their lives. But this season has primarily focused on one huge milestone for John-David Duggar — his engagement to Abbie Grace Burnett and their subsequent wedding planning. With such a big event to plan, it makes sense that John-David's twin sister, Jana, was able to help the couple in the months leading up to the ceremony.

From helping with the engagement, to making the wedding come together, to helping Abbie pick out the dress, Jana was there for it all. And she really helped make her future sister-in-law's journey to the altar special when she planned a wedding dress pop-up shop for Abbie in the Duggar guest house.

Jana was able to create a wedding dress shop, with the help of her siblings, who offered their very strong opinions about getting the "shop" together. This clip exclusively shared with Romper from an upcoming episode of Counting On shows how it was able to come together so quickly.

More hands are better than none, right?

In the clip, Jana proved that she knows her way around an electric saw and is quite the designer.

"Jana has a very broad skill set," sister, Jessa Duggar, explained. "She's our handy woman, if you will. So anytime we need a project done, she's the one we call on. She can handle the saws and the drills and build things. She's very creative."

"Jana doesn't wait for something to get done, she usually figures it out herself and gets it done," brother, Josiah Duggar, added.

Those are amazing compliments, all of which Jana can take pride in. It takes a lot to take charge of 19 siblings, but Jana has proven that she is more than capable.

And this definitely isn't the first time Jana has recently showed off her creativity. Last week in an Instagram post, she revealed that she surprised her parents while they were away by completely remodeling their room (with the help of her siblings), according to People. The before and after photos look incredible.

It appears that Jana isn't just a skilled project manager, designer, and carpenter — she's a baker, too. After she joined Instagram in January, Jana shared a recipe for bread loves she makes with her family members that looks so delicious. Leave it to Jana to be the most creative and handy of her siblings.

This is such a fun side of Jana to see. Over the years, fans have watched her grow up right in front of their eyes. And while her siblings have had their own "things" over the years, Jana's willingness to help out around the house and do something special for her family members has persisted.

The best thing is, fans can see more of this side of Jana when the new episode of Counting On airs on TLC this upcoming Monday.