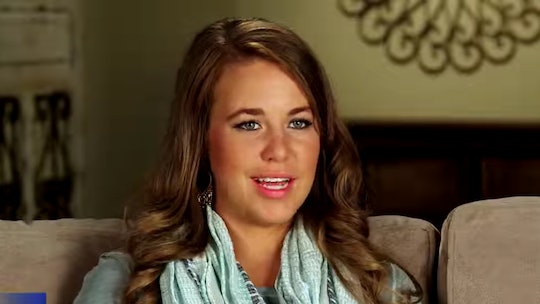 Ever since Jana Duggar started her own Instagram account, rumors have been flying about the possibility of her being in a courtship. She's 29 and unmarried after all — practically unheard of amongst the Duggars. For non-Duggars, though, Jana is still young and has plenty of time to settle down. Still, the pressure is definitely on. But what does the Counting On star think about it all? Jana Duggar's interviews about dating show she's not settling for the first guy that comes around.

Back in 2014, for example, some people were convinced Jana was dating NFL player Tim Tebow, as E! Online noted. More recently, the eldest Duggar daughter was linked to Lawson Bates of the Bates family with which her family has been long-time friends, according to Hollywood Life. On Jan. 21, Jana had shared a photo of herself in front of a bowl of mac &cheese and a plate with a grilled cheese sandwich on it. “Say cheese!” she captioned the Instagram picture.

All it took was for Lawson to leave three grinning emojis as a comment, and Counting On fans were convinced they were courting. "I heard you and Jana are a thing!," one Instagram user wrote. It didn't take long for other fans to follow suit. However, Jana shut down that rumor mill pretty quickly, writing, "No, we’re not a thing," along with a blushing emoji.

Although producers of Counting On have shied away from directly asking Jana about her relationship status, or her hopes in that area of life, she did open about about her plans for the future a few years ago. "I don't really know what the next five years will look like," Jana said in a 2016 episode of Counting On. "Maybe I'll meet the one and get married and have kids and stuff."

There have been different guys come along and ask. But yeah, it's just not ... They haven't been the right one ... I'm not just out to get married to the first one that comes along.

Jana went on to say that it can be tempting at times to settle — especially seeing her siblings going out on dates. She explained that it often feels like she's stuck in a "weird" in-between stage.

You know, I'm not a younger one — but then I'm not [an] older, married one with kids. And so just being busy with where God has me right now and being content in this place, and learning as much as I can.

Cleary, there has been plenty of speculation about Jana's potential courtships through the years. But it seems she just hasn't yet found the partner for her. And you know what? That's perfectly OK.

Honestly, I love that Jana isn't rushing things in the relationship department. It's refreshing for a Duggar — especially considering the pressure she must feel every time another younger sibling gets married off. (And I'd imagine it was even worse when her twin brother, John David, tied the knot, as he did late last year, per People.) Thankfully, Jana knows she's worth waiting for, and isn't lowering her standards one bit.