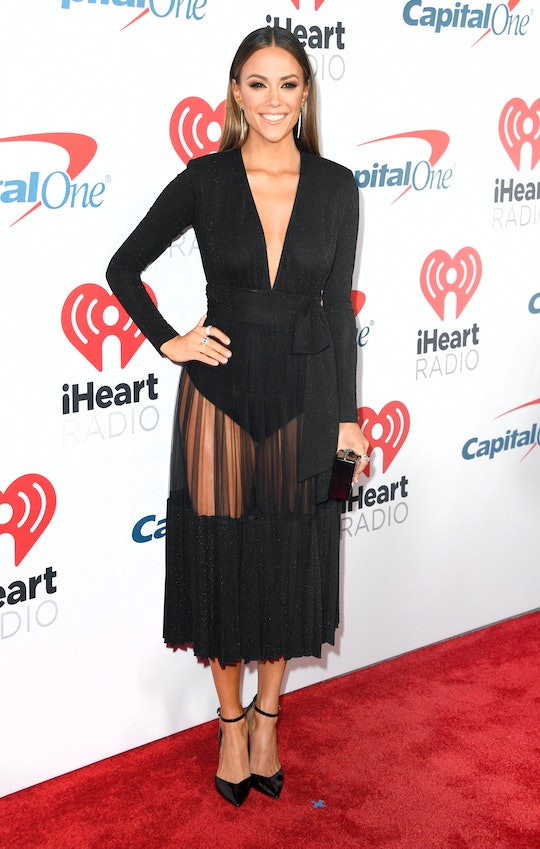 I thought I was a multitasking queen back in college when I was juggling a part-time job and a full class load. Fast-forward nearly 10 years, though, and current me would be laughing in pre-kid me's face. Because guys, I had no idea. Like most parents, I've learned that having a child forces you to become a professional at carrying out roughly 10 tasks at any given time. It's just a fact. And honestly, Jana Kramer baby-wearing and cooking dinner in this new photo proves moms are the ultimate multitaskers.

As a refresher, Kramer and her husband Mike Caussin have two children, according to Us Weekly — Jolie, 3, and Jace, 3 months. On Wednesday, March 6, the country music star took to her Instagram Story to vent about an all-to-common phenomenon: the "man cold." Although Kramer had been battling through her parenting duties with a fever for two weeks, her husband merely had a cough. That's it. "Any other husband out there like, literally act like the biggest baby when they have a cold?" Kramer says to the camera in a video clip.

"Women are fortunate they get to experience childbirth, because then you guys know what it's like for a man to have a cold."

Kramer went on to share more video clips from her day of solo-parenting during Caussin's "man cold" — including preparing dinner while wearing their youngest child, Jace.

The mom of two later shared an Instagram photo of her multitasking skills, writing, "Who rules the world ?! MOMS. Give yourself a frickin pat on the back, or a big pour. U deserve it!!!!! #momlife #bestlife."

Judging by the comments, Kramer's followers appreciated the shoutout — and were also completely in agreement. One Instagram user wrote, "@kramergirl it makes me so happy to see you using this around the house! I busted my baby bjorn thing out today as well so I could get dinner done with my one month old baby girl. First time mom here! Keep up the great work girl!👏🏽💗."

Yet another Instagram user wrote, "Thank you for this... because I've literally had the worst day of my life with my 19 month old lol 🍾😘."

Another person chimed in with, "This was me last night! Gotta love baby carriers for getting stuff done 👌🏼."

Others noted how Kramer was standing extra far away from the stove while wearing her baby for the photo — probably to head off the mom-shamers before they could attack her again. The trolls recently came out to criticize Kramer after she posted a video of Jolie refusing to eat her dinner, according to People. (So I imagine the rage that comes with strangers telling her how to parent is still fresh in her mind.)

Personally, I can relate so hard to Jana Kramer's multitasking. It seems like I'm doing no fewer than six things at a time, thanks to having four kids and a work-from-home arrangement. (In fact, I may or may not be wearing my baby while typing this right now and also refereeing a "disagreement" between a 5-year-old and a 3-year-old.) So keep on keeping it real, mama. Because we're all right there with you.