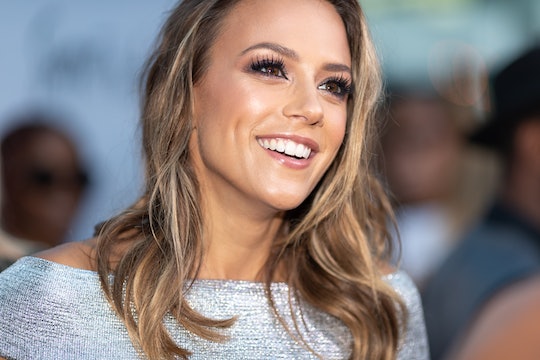 It's a happy day in the Kramer household. That's because Jana Kramer gave birth to a baby boy on Thursday, her second child with Mike Caussin. Spoiler alert: the infant is incredibly cute.

Fans might remember that Kramer suffered multiple miscarriages before getting pregnant with her second child. "I don’t want I’m sorry or sympathy," she wrote on Instagram in December 2017 about her struggle. "I just don’t want to feel alone. And I know I’m not."

But six months later in June, Kramer shared the happy news with fans that Jolie, her 2-year-old daughter, would be a big sister.

Then in July, Kramer took to Instagram to share that she and Caussin were expecting a boy. “I was convinced it was a girl,” Kramer told Us Weekly about the surprise. “Like, absolutely convinced with how sick I’ve been and the cravings I’ve had."

Cut to November, and Kramer's baby boy — who she has named Jace Joseph Caussin — is finally here.

"Welcome to the world Jace Joseph Caussin," Kramer wrote in an Instagram post featuring her newborn. "Our hearts are so full. Thank you to all our friends and family and all of you who have supported Mike and I and our growing family."

Aww. What a precious photo, right? The love in this snap is truly touching.

"Congratulations on the birth of your precious baby boy!!!" someone said.

Another person chimed in: "Just beautiful! Congrats to the whole family!"

What's funny about the timing of this birth is an Instagram post Kramer wrote one day before Jace's arrival.

Yep, it sounds like Kramer knew Jace was about to make his debut when she penned that post. Momma is one heck of a trooper.

Going back to the name, Kramer teased the moniker at the Carter’s and OshKosh B’gosh fall fashion show in New York City in August.

“It goes really good with Jolie,” she told People.

I agree with Kramer that Jace pairs well with Jolie. Although I didn't foresee Kramer sticking with the "J" theme, I'm happy she did. I bet the shared letter will bring the siblings even closer.

“Babies and having other kids don’t save a marriage but for us, this baby truly has been a savior for us in a way that we’ve really done our work and gotten dirty,” she told People about resolving her past issues with Caussin.

Once again, congrats to Caussin, Kramer, and Jolie on their new family member. The family deserves nothing but love and happiness during this special time.

More Like This
Alec & Hilaria Baldwin Welcome Baby #7, And Revealed Her Cheerful Name
Khloé Kardashian Shares First Look At Her Son & His Birth
The Cannon Legacy Is Strong: Here's A Look At All Of Nick Cannon's Kids
Snooki Hints That A Sunday Dinner With All The Jersey Shore Kids Is In The Works