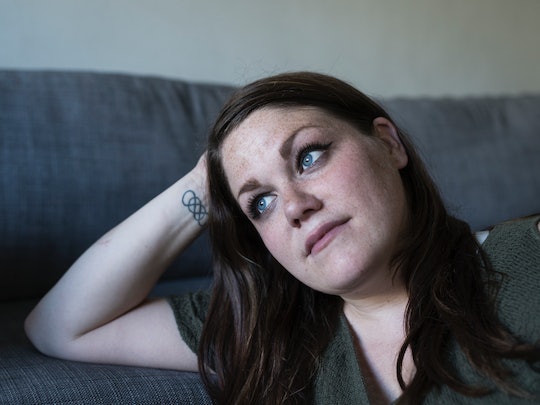 A&E’s new six-part documentary series, Many Sides of Jane, explores what life is really like for a young woman living with Dissociative Identity Disorder (DID), which was previously known as Multiple Personality Disorder. On the series, she juggles motherhood, therapy, and her complicated past, but viewers are curious to know more about Jane Hart on Many Sides Of Jane.

Jane Hart is a 28-year-old single mom from Boise, Idaho, who got married and moved to rural Alaska to escape the abuses she faced as a child. According to People, in 2014, Hart’s marriage ended, and she took her two sons back to Boise to start a new life. But when she moved back, she realized that the voices she had been hearing in her head for years were getting worse. “It felt like I always had a crowd of people around me, looking over my shoulder, commenting and arguing over everything I did,” she told People. “I’d reached a breaking point. I remember thinking, ‘I can’t do this anymore. I’m either going to take my life—which I knew I couldn’t do because my sons needed me—or I’ve got to get help.’”

She told the outlet that after two years of intensive therapy, she was diagnosed with DID and was told she harbored nine different female identities, ranging in age from six to 28, all with different names and personalities. “It’s validating to finally know I have a reason for the way I am,” she said. “But it’s also really scary to know I have it, to know that my personality has been fragmented and I don’t have control over the identities inside me.”

Hart told People that her mind created these identities in order to protect her, and she didn’t know or remember the extent of her abuse until they began talking. “My whole childhood I knew I was afraid—I just didn’t know of what,” she said. “I didn’t know the true breadth of the abuse until after my parts began telling their stories.” Her nine “parts” include Madison, 28, a lesbian who protects her different parts; Alexis, 17, a fun, party girl; Jayden, 11, a tomboy who holds the physical abuse; and Janie, 6, an innocent child who remembers no abuse.

According to A&E, Hart is on a journey to find out what caused her DID and how she can co-exist with her different parts. Throughout the docuseries —under the watchful care of her clinical psychologist — she will recognize the sexual, emotional, and physical abuse she suffered as a child, along with facing the strained relationships she has with her family.

“Jane graciously allows cameras into her private day-to-day life, including her intense therapy sessions, to capture every moment as new memories emerge helping Jane as she continues to unlock mysteries surrounding DID and her childhood trauma that caused it,” A&E wrote in a press release. “We are proud to partner with Jane as she bravely opens up her private life to our viewers to ultimately remove the stigma attached to Dissociative Identity Disorder, help spread awareness and hope, while showing the world that they are not alone when it comes to their own mental health struggles.”

The docuseries offers a rare look inside the life of someone with DID, and hopefully, it will change the way society views mental health, so that more people can ask for help when they need it.