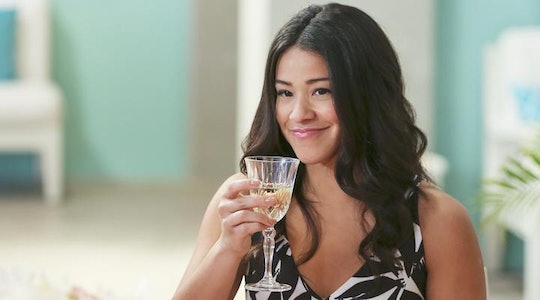 There's a lot of reasons to watch Jane the Virgin but the best one is the narrator who's commentary is always on point. On Monday's night episode, the narrator on Jane the Virgin made a Donald Trump joke in the best way and naturally fans loved it. At the start of the episode Michael finally got fed up with desk duty at the police department and decided to quit his job. With six months severance pay coming his way, he decided to use that time to figure out what he really wanted to do with his life. After taking an aptitude test and being told he should be a detective (shocker) he ended up thinking maybe comedy was his best option. Eager to get started he signed up to perform at a comedy club and Jane, who was already struggling with her meddling, wasn't sure if she should try to convince him not to do it.

However, Xo was quick to remind her that Michael is a grown man and should either succeed or fail on his own. Mr. Meddler, the bee -ike puppet that had been popping throughout the night, quickly agreed with Xo saying, "I'm with her," the popular slogan for Hilary Clinton's campaign. That's when the narrator jumped in with the perfect zinger. "I was too," he said. "Along with the rest of the popular vote."

So far the response to the joke has been overwhelmingly positive and props has to be given to the Jane the Virgin writer who thought up this clever one-liner — not that this is something new for the show though. The writers have frequently slipped in social and political critiques by way of the narrator. For example, there was one episode where the narrator kept track of when the show was passing the Bechdel test (when two or more women or discussing something other than a man). Or the time when they threw in a little aside about how undocumented immigrants can sometimes be deported when they need to go to the hospital, like what almost happened to Alba.

Jane the Virgin writers excel at putting in their own social and political commentary into the show without making it feel preachy, but rather authentic. I can't wait to see more.