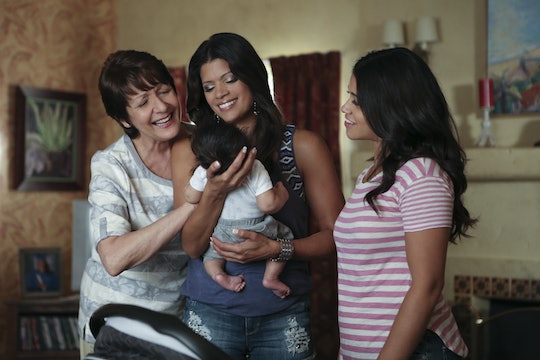 Jane & Xo Fight On 'Jane The Virgin,' & They Might Actually Need It

Jane the Virgin is a show that's grounded in family dynamics. The solid foundation between Jane, her mother, and her grandmother have provided some of the most heartwarming moments of the series, and they've also given the show a grounding influence that anchors the more dramatic telenovela twists. However, "Chapter Thirty-Nine" threw a wrench in that dynamic when Jane and Xiomara had a huge fight. And unlike other fights they've had, they didn't make up right away. That fight follows them into "Chapter Forty" and as painful as it is (for them and for us), the fight between Jane and Xo is one they might actually need.

The argument started at Jane's bachelorette party. Despite the fact that she didn't want to party down with her mom, Jane went along with Xo's partying ways – up to a point. When Xo made out with Lina's ex, it brought up way too many bad memories of other times Xo had gone too far. Jane was sick of always being the responsible, practical one. She was sick of playing mom to her own mother, so when Xo came to her to apologize, Jane decided not to let it go. She had been a control freak all her life to make up for Xo being out of control and she had reached her breaking point.

It gets even worse going forward. Jane and Xo aren't speaking, and it leaves Jane lonelier than ever, especially with all the wedding prep weighing on her. The problem is both ladies are in the right. It isn't fair that Jane has had to take care of her mother before she was even really an adult, and it's even more unfair now that she has her own baby to take care of. But Xo is a grown woman who has had to face judgement her entire life just because of her personality – because she's fun and a little wild and she enjoys her life to the fullest. She shouldn't have to deal with it from her own daughter too.

It was a necessary fight that had to happen so that the deep-rooted issues in Jane and Xo's relationship could finally come to the surface. Relationships between parents and children are a continuous renegotiation of boundaries, especially as kids get older, and those kinds of real issues are what Jane the Virgin excels at handling.

Thankfully Jane and Xo are able to make up in true Jane the Virgin fashion: on the set of Rogelio's telenovela, watching their issues acted out by some even more glamorous actresses. Their fight is really rooted in that renegotiation: everything is changing and even though it's a good change, it's hard. It's messy and it hurts, but it has to happen for people to grow.