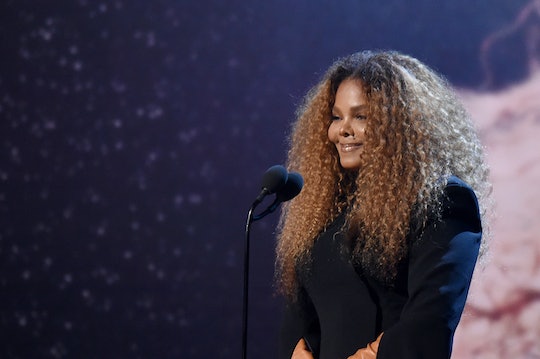 Let's be honest: Acceptance speeches at award shows and induction ceremonies can be excruciatingly boring. Especially when the honorees simply rattle off a long list of people they're thanking. Yawn. Look, I get that it takes an army of people to create a movie or produce a song. But give me something real. A story. An example of how someone inspired you. Anything but a flustered, live credit roll. Well, one iconic singer recently delivered an "awwww"-worthy acceptance. Because honestly, Janet Jackson's tribute to her son during her Rock & Roll Hall of Fame speech was incredibly touching.

On Friday, March 29, Jackson was inducted into the Rock and Roll Hall of Fame. "As the youngest in the family, I was determined to make it on my own. I wanted to stand on my own two feet," Jackson said, according to USA Today. "But never in a million years did I expect to follow in their footsteps. Tonight, your baby sister has." The singer, 52, also have a tribute to her son, Eissa, who was born in 2017, E! Online reported. "He wakes me up every single morning singing his own little melodies. He's only two, you guys," Jackson told the crowd. She added:

I want you to know that you are my heart, you are my life, and you have shown me the meaning of real unconditional love.

This isn't the first time the pop icon has opened up about how motherhood has changed her. In a cover story for Billboard, Jackson spoke about the joy her son has brought to her life. "My son, even in his short 17 months on the planet, has showed me that love, no matter how deeply you believe you have experienced that emotion, can always go deeper. Love is limitless," she told the publication. "For someone like me, raised in show business where self-concern is always a priority, how fortunate I am now to be concerned, first and foremost, with the welfare of someone else."

Day after day and night after night, holding my baby in my arms, I am at peace. I am blessed. I feel bliss. In those moments, all is right with the world.

In April, 2016, Jackson announced she would be postponing her tour for an exciting reason, ET Online reported. "I thought it was important that you be the first to know," she explained at the time. "My husband and I are planning our family, so I'm going to have to delay the tour." (Eissa's father is her ex-husband, Wissam Al Mana.) That October, she publicly confirmed her pregnancy at age 50, with a photo showing off her bump and a statement to People. "We thank God for our blessing," she told the magazine.

Clearly, motherhood later in life has been an incredible blessing for Janet Jackson. Although she usually keeps her private life, well, private, hearing Jackson give a shout-out to her toddler son was both unexpected and incredibly heartwarming. Congrats on your amazing achievement, Ms. Jackson!