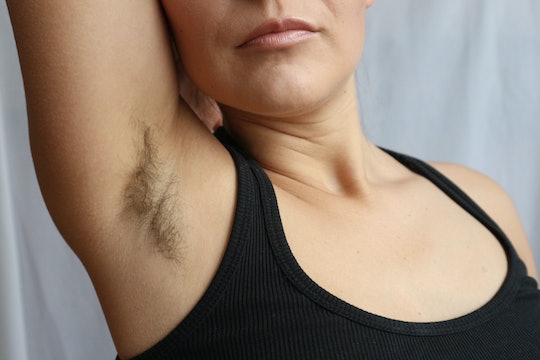 In perhaps my favorite "F you," to the system of oppressive gender norms, my Insta timeline is covered with photos of Januhairy, the latest internet trend that has women growing out all their body hair. What began as a small part of a theater student's performance grew into an international movement that is raising money for a very important cause.

Much like No Shave November, or Movember — a social movement that calls on men to grow out their facial hair in order to raise awareness of men's health issues — Januhairy is putting an important issue relating to women's wellbeing in the proverbial spotlight. By encouraging women to embrace their body hair, Januhairy is bringing attention to the pressure and shaming that leads women to shave their body hair even when they don't personally want to, as the BBC reported.

According to Buzzfeed, the movement was started by Laura Jackson, a British drama student at the University of Exeter in the U.K. She explained in her Instagram post about Januhairy that she felt compelled to embrace her body hair after growing it out for a role. Now, she is encouraging other women to do the same and using the publicity that she's gaining to raise money for a body-positivity charity.

As can be expected, not all reactions to Jackson's body hair were positive. But she explained on her post to the that the criticism she received only added to her desire to raise awareness:

There had been some parts that were challenging for me, and others that really opened my eyes to the taboo of body hair on a woman. After a few weeks of getting used to it, I started to like my natural hair. I also started to like the lack of uncomfortable episodes of shaving. Though I felt liberated and more confident in myself, some people around me didn’t understand why I didn’t shave/didn’t agree with it.

As HuffPost reported, Jackson went on to explain how her emotions toward her body hair led to the movement that is steadily gaining support:

I realized that there is still so much more for us to do to be able to accept one another fully and truly. Then I thought of Januhairy and thought I would try it out. It’s a start at least . . .

And I'd say it's a good start at that. Just over a week in, the movement had gained substantial support. Nearly 3,000 Instagram posts with the hashtag #januhairy were posted by Jan. 9, according to People.

Along with posting photos of body hair to social media, Jackson is calling on her supporters to contribute to her Crowdfunding page benefitting the body-positive organization, Body Gossip. According to its website, the non-profit empowers everyone — not just women — to be the best version of themselves through Arts and Education. Jackson is looking to raise 1,000 pounds (a little under $1,300) for the organization's education program that teaches young people about body image, People reported. She's about a third of the way there already.

Jackson explained to the BBC that she isn't out to make people angry, but to encourage self acceptance and empowerment:

I just want women to feel more comfortable in their own beautifully unique bodies. This isn't an angry campaign for people who don't see how normal body hair is. It is an empowering project for everyone to understand more about their views on themselves and others.

Any movement encouraging body positivity and self acceptance is a win in my book. If you're interested in joining in on the fun, throw your razors out (or just put them in the medicine cabinet until February, because those things are pricy) and let your body do what it does. Who's with me?