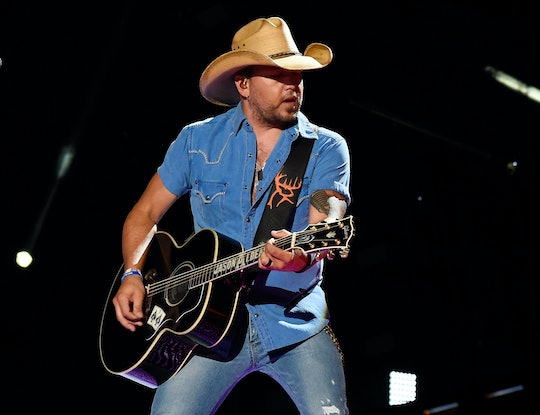 Tis’ the season for questionable things, and while some of us choose to eat candy for breakfast, others choose to wear controversial costumes on Halloween... costumes which may or may not haunt us for years to come. And this year the top honor for the worst costume decision goes to country singer Jason Aldean, who wore blackface on Halloween while attempting to channel Lil’ Wayne.

Aldean’s costume popped up on the Nashville Gab last Thursday, but it didn’t get much attention until late Tuesday night. That said, the Internet has been abuzz ever since. In the image, the 38-year-old singer can be seen sporting black sunglasses, black dreads, and blackface. While his publicist did not immediately respond to Romper's request for comment, a statement released to the Associated Press from the singer's rep confirmed the photo is real and that Aldean “dressed as rapper Lil’ Wayne,” though it has not yet been confirmed whether or not Aldean darkened his skin.

The country singer has yet to issue a statement — or an apology — but that hasn’t stopped others from talking, especially on Twitter, where users have no problems criticizing his offensive costume choice:

Aldean is not the first celebrity to make this "mistake": Just two years ago Julianne Hough outraged many when she sported blackface as part of her Orange Is The New Black Crazy Eyes Halloween costume, and I fear Aldean and Hough won't be the last. So if you are considering one of these questionable costumes for next Halloween, one word of advice: Don't. Just don't.