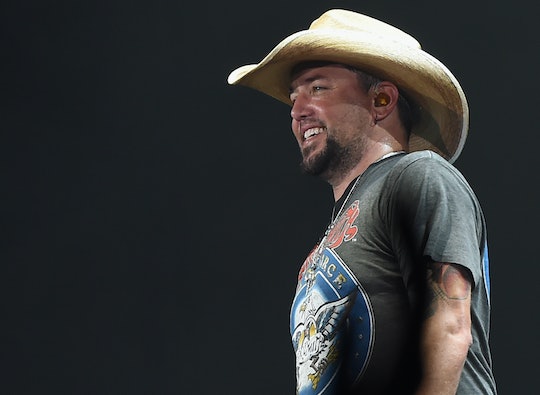 On Sunday night, a shooter opened fire on a crowd at a country music festival in Las Vegas from a 32nd story window as Jason Aldean and his band performed. Fifty-eight people lost their lives and hundreds more were injured in the attack. On Saturday, the performer opened the show on Saturday Night Live in a show of support. Jason Aldean's opening message on Saturday Night Live was a truly heartwarming tribute to the victims of the shooting.

Saturday night's show was hosted by Gal Gadot, otherwise known as Wonder Woman. But instead of opening right away with Gadot's monologue, the episode started with the emotional message from Aldean. In his statement, he said:

I'm Jason Aldean. This weekend we witnessed one of the worst tragedies in American history. Like everyone, I'm struggling to understand what happened that night and how to pick up the pieces and start to heal. So many people are hurting. There are children, parents, brothers, sisters, friends — they're all part of our family. So I wanna say to them, we hurt for you and we hurt with you. But you can be sure that we're gonna walk through these tough times together every step of the way. Because when America is at its best our bond and our spirit — it's unbreakable.

The country music star and his band then played a rendition of Tom Petty and the Heartbreakers' "I Won't Back Down," a painfully apt choice not just because of the song's uplifting message of strength, but also because Tom Petty died on October 2, the day after the shooting. It has not been a great week for the United States, to put it lightly.

In light of the tragedy on Oct. 1, many live programs took time out of their normal broadcasts to say a few words in honor of the victims of the attack. Programs like Dancing with the Stars and Jimmy Fallon both took a few moments to talk about the senseless attack. Truth be told, in light of such events, the gleeful silliness of shows like Saturday Night Live feel almost inappropriate, as if we shouldn't be allowed to laugh at something ridiculous when so much sadness is happening in the world. But this tribute in particular felt especially tasteful and moving after the tragedy.

Aldean, who was performing at the time of the attack, must have been especially affected by the attack. Personally, I found his words at the beginning of the show to be extremely heartfelt. Shortly after the shooting, Aldean posted to Instagram to let his fans know that he was safe, and how heart-sick he was for all of the fans attacked at the show. In his caption he wrote,

Tonight has been beyond horrific. I still don't know what to say but wanted to let everyone know that Me and my Crew are safe. My Thoughts and prayers go out to everyone involved tonight. It hurts my heart that this would happen to anyone who was just coming out to enjoy what should have been a fun night.

There is never any good explanation for when something like this happens, and the motives for the attack are still a mystery. Sometimes the reactions to these kinds of tragedies are disappointing or, even worse, harmful. After every mass shooting, the issue of gun safety comes up — as it should. Saturday Night Live did not hold back when it came to this issue either. At the opening of the "Weekend Update" segment, Colin Jost said, "The investigation into the tragedy in Las Vegas this week has sparked a larger debate in America between people who want common sense gun control and people who are wrong."

I certainly don't have all the answers to these questions, but I appreciate shows like Saturday Night Live speaking out.