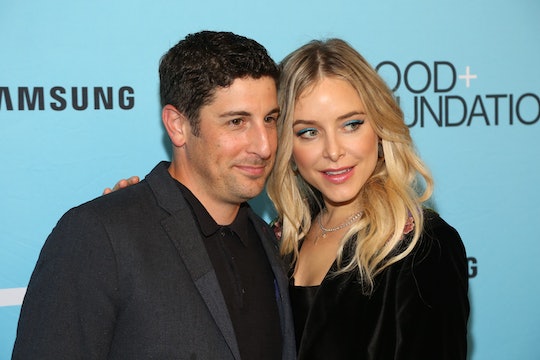 As anyone who has cared for an infant for an extended period of time can attest, they tend to go through a lot of diapers — all day long. In fact, I can't even begin to estimate how many wet and/or dirty diapers I've changed through my years a mom. (Honestly, I don't think I want to know.) After a while, it just becomes the norm — and parents eventually become pros at knowing when their little ones need changed. (You know, without having to smell their behinds.) With that said, Jason Biggs getting shamed for posting a photo of his son with a full diaper is just ridiculous

The funny dad of two took to his Instagram Story on Monday, Oct. 1 to share photos and videos of his youngest child, Lazlo, chilling with Biggs in front of the TV. As People reported, the little guy appeared to be sporting a full and sagging diaper, which followers made sure to point out to Biggs in droves. In a follow-up video the American Pie star called out these Instagram users for their patronizing comments. “Hey, all you rule dorks out there giving me sh*t about Laz’s diaper: I changed it, okay? It ain’t full anymore — lay off me,” Biggs said in the video. “It’s 5:45. I’ve been up for about an hour.” Hours later, he was apparently still getting messages about Lazlo needing a diaper change, prompting another video from Biggs. “I’m still getting comments about my son's diaper being full, from this morning, even after I made a post saying that I changed it and it wasn’t full anymore," he said, simply, to the camera.

Geez, folks! The kid had one saggy diaper during the early morning hours on dad's watch, and it seems Instagram assumes that men are clueless. Do people seriously think fathers are incapable of assessing the diaper situation and then acting accordingly? Wait, don't answer that. Because based on the current situation in men's public restrooms — including a noticeable lack of changing tables — society still thinks that diaper duty is primarily a mom's job. Just ask this dad, who is often forced to squat against bathroom walls and use his lap as a changing table for his son.

In other Jason Biggs/Jenny Mollen household news, it looks like today is actually a big milestone for little Lazlo. That's because one year ago on Tuesday, the famous couple welcomed their second child, according to Us Weekly. The proud — and equally as funny — mama took to Instagram to share a few snaps of the birthday boy. “Bloody hell, I’m ONE!!!! #lotsiemotsie,” she captioned a close-up of her toddler. She followed this up with another shot of Lazlo playing with a step stool, next to a puddle of coffee on the floor and a satined rug. “Lotsie started his bday off w a bang by dumping an entire mug of cold coffee over his head while singing Life is a Highway,” Mollen wrote. LOL.

It's hard to believe, isn't it? Even though Biggs and Mollen keep theirs fans updated on pretty much a daily via Instagram, it seems like just yesterday the nervous father was about to welcome his second child to the world. Time really does fly.

And hey, before we know it, Lazlo Biggs will be ditching the diaper, too — and Jason will no longer have to worry about being shamed on Instagram.