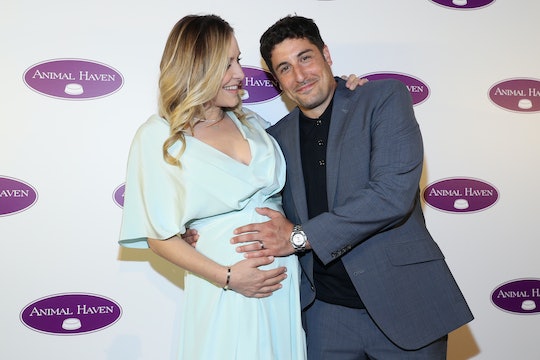 Things just got real. On Monday, Oct. 2, Jason Biggs and Jenny Mollen welcomed their second child, and their Instagram posts give fans an intimate look into the couple's lives. According to Us Weekly, Lazlo Biggs was born at Lenox Hill Hospital in New York, weighing 7 pounds, one ounce, and measuring 20 inches long. In a video posted to his wife's Instagram account on Thursday morning, the American Pie actor described his feelings as Mollen was about to give birth:

OK, so Jenny just got wheeled into the O.R. I have to wait here 20 minutes now, in my goofy hat. I did not expect to be this nervous and this anxious and excited. I mean, I expected to be excited, but I feel — from what I remember, I feel exactly the same as I felt the first time I did this. But I expected not to feel this way again. I thought I'd be way calmer, and cooler, and collected, and I am not. We're about to have baby number two. I hope Jenny's OK. She's getting a spinal, which freaks me out, but I'm sure she'll be fine. Anyway, baby number two. What's his name?

This isn't the first time that a celebrity has opened up to fans, but allowing the world to see him at this incredibly personal moment brings things to a whole new level. Most of us probably weren't even privy to our best friends' states of mind just minutes before their kids were born, and here's Biggs, inviting complete strangers into the hospital waiting room to join him on his journey. If you've even wondered what it feels like to be simultaneously thrilled and panicked, waiting for the best news of your life while also dreading the worst, it comes through loud and clear in Bigg's video.

Mollen shared another, less intense video, but it's still touching if you know the back story. Lying in a hospital bed, she gazes adoringly at a brass pineapple perched on a chair, while the fetal Doppler broadcasts her son's heartbeat. "Obviously had to bring Teets for moral support," the caption reads. Mollen lost her beloved poodle, Mr. Teets, last year, and in a heartfelt essay for Lenny Letter, she revealed that she still brought the urn containing his cremated remains on walks with her son, Sid, and "had to fight the urge not to tuck [the urn] into bed next to me." Not everyone is lucky enough to have had such a special relationship with an animal, but for those who have, it's perfectly understandable that she'd want him with her as she welcomed the newest member of the family.

Mollen, an actress and bestselling author, has been candid about her personal life throughout her pregnancy, sharing photos most people wouldn't even let their closest friends see. Earlier this week, she posted a picture of herself wearing nothing but a pair of underwear, and Biggs' hands for a bra. After posting the videos leading up to Lazlo's birth, Mollen got back to what she does best: humor. She and Biggs are storing the baby's umbilical cord blood, she posted, because she's "convinced this will either one day save my life or just make for a killer facial." In a selfie with Biggs and her OB-GYN, Dr. Albert Sassoon, she joked that the doctor had been following her Instagram account.

And finally, she posted what everyone was waiting for: photos of the baby. "In this pic we were still calling him Sid 2," she captioned the first shot, in which Biggs cradled Lazlo while sitting on the edge of his wife's hospital bed. Another photo showed what appears to be the couple meeting their baby for the first time, huddled together in the O.R. while a drape obscures Mollen's lower half. How she convinced the doctors to allow a phone in there while her abdomen is still cut open, I can't even imagine.

If you really want to know what to expect when you're expecting, forget the books and the classes, and just scroll through Mollen's Instagram. From scary to funny to sweet, her posts provide a complete picture of the birth experience. The choice that she and Biggs made to share this part of their lives with fans is such a generous gift.