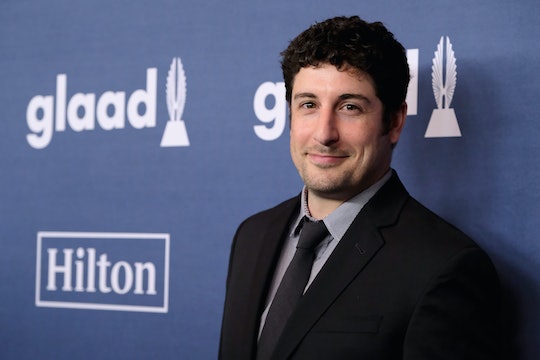 When it comes to explaining the birds and the bees to children, it can definitely be an awkward situation if parents haven't done a little prep work. And if you happen to be a celebrity who starred in movies in which losing your virginity is a major theme, the topic might come up sooner rather than later —thanks to the internet and school and all. In a recent interview, Actor Jason Biggs said he is glad he has sons because he thinks it'll be easier to explain his sex-themed American Pie scenes. And sorry, but I'm calling BS.

Biggs welcomed his first son, Sid, back in February 2014 with his wife, Jenny Mollen, according to E! Online. The couple recently added a second son, who they named Lazlo, on Oct. 2 of this year. With a 3-and-a-half-year-old and an 8-week-old, it's likely that "the talk" is still at least a few years away. Nevertheless, Biggs, 39, addressed how the iconic American Pie scene — you know, the one in which his character is, um, experimenting with a warm apple pie in the kitchen, and then his father walks in on him — might come into play when it comes to having the sex talk with his two boys.

“I picture a scenario where it’s like — I don’t know what grade, hopefully a little bit older — but one of his friends can come in and be like, ‘Hey, I saw your dad’s penis on TV last night!’" Biggs told People. “That’s a very real possibility for our life." Ha! I would imagine that might be a fairly awkward lead-in to a serious conversation about sex. But at least Biggs is mentally prepared for the possibility.

However, for some reason, Biggs thinks he's lucked out because he has sons — and not daughters. “I’ve only thought of it in regards to I’m glad that I have boys versus girls,” he told People. “I don’t know how it’s going to go down, but I know that no matter how it goes down, it’s going to be easier having sons than it would have been having girls.” The 1999 comedy could prove useful in place of a father-to-son chat, Biggs suggested. He told People:

I could just show him the scene of me getting ‘the talk’ from Eugene in American Pie. I can be like, ‘Son, sit. It’s time for us to have the talk. Anyway, play.’

I know Biggs is just poking fun at the ridiculousness (but hilarity) of his American Pie role, and hopefully he wouldn't actually use it as a teaching tool for his children. However, his thoughts about having the sex talk with boys being easier just baffles me. Maybe it's because Biggs thinks he would personally be more comfortable talking about human sexual reproduction with children who are biologically similar to him? I have no idea, But as a mom to one boy and two girls, I don't really think the topic needs to be approached any differently based on the child's sex.

From my experience, kids are pretty accepting of straightforward answers to: "Where do babies come from?" (And no, we've never used the stork as our explanation.) Actually, "the talk" isn't necessarily something that happens all at once. In fact, the process can begin as soon as your child starts talking, according to Today's Parent, by teaching them the correct names for their genitals. Penis. Vagina. Breasts. It can continue on from there with basic answers to anatomical questions about how babies are made.

Each time I was pregnant after having my son, he would inevitably ask how the baby got in my tummy. I explained that sperm from a daddy and an egg from a mommy come together to form a tiny thing that grows into a baby. And when the baby is big enough, it will either come out of a mommy's vagina, or a doctor will give her medicine (so she can't feel anything), and the baby will be cut out of her tummy. Granted, I didn't go into great detail about how the sperm and egg happen to meet — or that much of the time, adults have sex without the intent of having a baby. (But that's for another time.) I plan to use the same educational strategy with my two daughters. Because they're rational human beings who can handle the same truth as their brother, in the same manner.