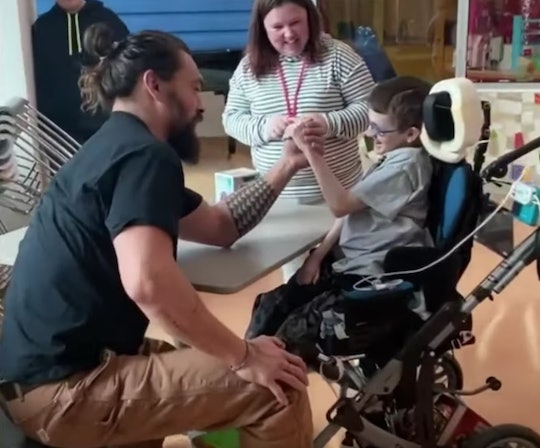 Jason Momoa, AKA Aquaman, Arm Wrestling A Boy At A Children's Hospital Is So Pure

While it's hard to imagine anyone defeating Aquaman in battle, that's exactly what happened when actor Jason Momoa arm wrestled a young patient at a children's hospital in Pennsylvania earlier this week. The Aquaman star took a break from filming a new thriller for Netflix to visit with a number of kids being treated at UPMC Children's Hospital of Pittsburgh.

More Like This
Meghan Markle Has Written A Children’s Book
A Newborn Baby Was Accidentally Named "Korn" On Her Birth Certificate
Sorry Citizen Kane, Paddington 2 Is Now The Top-Rated Film On Rotten Tomatoes
A Quick Explainer On Why People Aren’t Happy With Rachel Hollis

"The greatest part of being Aquaman is making children happy spreading aloha," Momoa wrote on Instagram in a post that featured both photos and video from his visit. "Had a little time before work to stop by UPMC Children's Hospital of Pittsburgh. Met so many brave strong babies."

The actor went on to explain that, during his visit, he'd made an extra special wager with one of the patients he met. "Me and Joshua bet that if he beat me in arm wresting he gets to have my trident," Momoa wrote, referencing Aquaman's Trident of Neptune, a magical weapon that gives him both power and the right to rule the seas.

Video of Momoa's epic showdown with Joshua show the actor added another prize to their bet: a visit to the set of Aquaman 2. "If you win, you're coming. If I win, you're still coming," Momoa can be heard telling Joshua. The two clasp hands in a traditional arm wrestle grip and, after a few seconds of struggle, Joshua happily forces Momoa's hand down to the table to become the victor of the match.

UPMC Children's Hospital of Pittsburgh thanked the actor for his visit in a brief statement shared across their social media channels. "Thanks to actor Jason Momoa, for stopping by this morning to visit the patients and families at UPMC Children's," the statement read.

While roles like Khal Drogo in HBO's Game of Thrones and Arthur Curry in Aquaman have made Momoa an instantly recognizable star, the actor has been committed to giving back. In July, for instance, Momoa volunteered with the Make A Wish foundation to take young fans with serious illnesses on a tour of Warner Bros. film set memorabilia. "I will do this for life," the actor later wrote on his Instagram. "Such an amazing day."

Momoa is currently in Pittsburgh to film Sweet Girl, according to CNN. The upcoming Netflix thriller sees the actor play a father who seeks to bring those responsible for his wife's death to justice while also protecting his daughter. Until his new film's release, though, Momoa is busy melting countless hearts with this precious video.