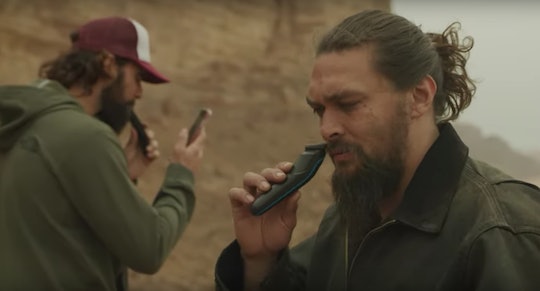 Jason Momoa Just Shaved Off His Beard & He Looks *So* Different

It is truly the end of an era. Though we have just begun the final season of Game of Thrones, some former cast members are already eager to say a final adieu to their famous characters — and their very famous facial hair. Yup, you read that headline correctly, Jason Momoa just shaved off his beard and, no, he didn't do it break our hearts. Rather, he did it to raise awareness for a really good cause, and though we will for sure get to that in a second, he looks SO different, and it's amazing.

In a video Momoa posted on his YouTube channel on Wednesday, which has more than 233,000 views as of this morning, he's seen walking throughout a trash-littered desert with a cleanup bag in tow. "I'm shaving this beast off, it's time to make a change," the video's caption reads. "A change for the better...for my kids, for your kids, the world."

The 39-year-old actor and father of three says in the video that the last time he shaved was in 2012. "Goodbye, Drogo," he said, before bidding adieu to the rest of his famous characters that also sported that same signature facial hair. And wow, just, wow...

In the video, Momoa went on to say that he's doing this in an effort to raise awareness to the environmental crisis our planet is dealing with. He also proposes a solution, which is to use and continue to recycle aluminum. "About 75 percent of all aluminum that's ever been used is still in circulation today, so you drink the can, and in about 60 days, it will be back. 100 percent, infinitely recyclable," he said.

Momoa added that he hates seeing wastefulness, such as at airports, where you're given a tiny, plastic water bottle, when an aluminum one could be completely recycled. He also said that he "kicked it into gear" recently by creating his own water bottle that he not only wants fans and followers to use, but hopes that companies will "do the same" as well. He calls this his "quest," and his "journey."

"Change is coming, it's aluminum. We've gotta get rid of these plastic water bottles," he said. "Aquaman is trying to do the best we can. For my kids, for our kids, for the world."

Of course, fans on social media have been weighing in on the aesthetic change, given how known he was for having a beard, but are also commending him on using his platform for the greater good.

"I am so impressed that #JasonMomoa lured people in to watch him shave his beard and then regaled them with the reality of plastic pollution. Talk about using celebrity unconventionally to get a message across," one fan on Twitter wrote.

"Here I am in a timeline where Jason Momoa has to shave his beard because people don’t recycle and it’s the end times please wash out your cans before you recycle them, you monsters," said another.

Though many are commenting on his physical appearance as well, it seems the urgency of the fact that a huge celebrity has to make a video of himself grooming his facial hair to try to redirect people's attention to the severity of the pollution crisis is, well, not escaping many fans. Yes, it's totally awesome to see him rocking a new look, and all for a good cause. However, it is absolutely important that we also recognize that it really shouldn't have to come to this in the first place.

Either way, Momoa has a new look, we're making steps toward a change in our plastic and the health of our oceans, and it's pretty much a win-win either way.

More Like This
Quinta Brunson Got A Sweet Card From A Kid On Abbott Elementary After Her Emmy Win
Quinta Brunson Had To Give Her Emmy Speech With Jimmy Kimmel At Her Feet
'Squid Game' Is Coming Back For Season 2 On Netflix: Here’s What Parents Need To Know
Alec & Hilaria Baldwin Welcome Baby #7, And Revealed Her Cheerful Name