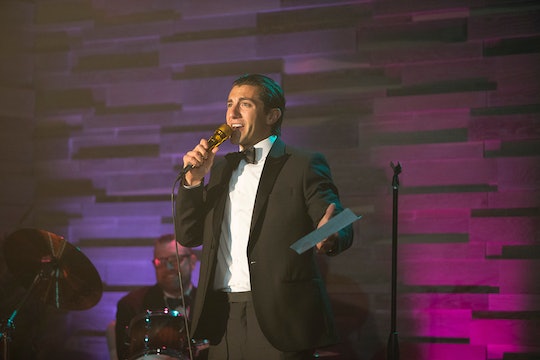 Jason Came Back For Round 2 On 'The Bachelorette'

Poor Becca had a tragically discomfiting day with Jason during what was supposed to be their dreamy and magical fantasy suite date in Chiang Mai, Thailand. She began feeling strangely midway through the date and just couldn't find her rhythm, so she opted to cut him instead of inviting him onto an overnight date with her. But Jason returned on The Bachelorette in a last ditch effort to win her back.

He arrived back on the scene the morning after Becca's one-on-one with Garrett, and explained that he simply couldn't leave Thailand without closure on their abrupt breakup. It's true that the relationship ended a little unexpectedly on the cusp of a fantasy suite invite, but unfortunately, Becca was certain of her decision. Jason actually handled the encounter with a lot of grace, making clear that he just wanted to have a more clarifying talk, given that the last one they had came out of an uncertainty meltdown. Becca freely admitted that after Jason left, she felt like she had pulled an Arie, blindsiding him with a breakup while knowing that she felt stronger about her other two finalists. But, Becca said, she knew her decision was the right one.

Admittedly, Becca did end the relationship in a really emotionally heightened state, and she herself didn't seem to know why Jason wasn't the one; she just knew. At one point, she made a joke about their future together and almost immediately, she stepped away to process an uncomfortable sense that she couldn't actually imagine that future. Later, during their dinner, she stepped away again, clearly overwhelmed by the realization that Jason wasn't the one. It was in this moment that she broke up with him and, understandably, Jason had some questions about how exactly we got from Point A to Point B.

Of course, intuition, gut feelings, and simply not being that into it are all valid reasons not to marry someone. But Becca was coming from a place of confusion and ambivalence which left Jason similarly confused and ambivalent. We've seen Bachelor/Bachelorette contestants come crawling back in some truly cringeworthy moments of unself-awareness, but thankfully, Jason's final visit was actually sweet and respectful.

"The love I had for you is as genuine as it's ever been in my life and the care I have for you is as real as I've ever had with anyone," he told her. "It means a lot that I could come on such an unconventional journey to find that. You gave me a lot."

Becca made clear that she reciprocated a lot of his feelings, but, in the end, she just felt more certainty in her other two relationships. "I don't ever want you to question your journey, or question whether you were behind or anything, because what we had was something so special," she told him. "You are one of the best guys I've ever met, and I never want you to doubt that."

They ended the conversation by mutually reassuring each other that they deserve the best, and Jason gave her a scrapbook of their time together, calling it "a meaningful story."

"I just didn't feel good about the door we were closing and how we were closing it the other night, and before I left, I wanted to make sure it was closed in the right manner," he said.

Becca truly cherished the gift and cried looking at it. But the two parted ways on genuinely good terms and Becca later sung his praises in a confessional interview (while crying some more, of course).

"The world needs more Jasons," she said. "I have never seen any guy be like that, especially after being blindsided. I knew he loved me because he told me that, but I didn't realize the extent of it, I guess."