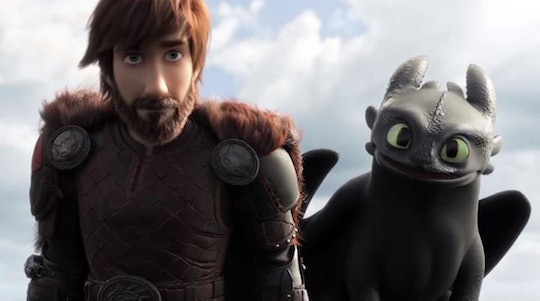 Baruchel, who voices Hiccup in all three How To Train Your Dragon movies as well as four short films and a TV series, is proud of the message he's sent to kids through his character who began at the beginning of the franchise as an outcast and has since proven himself to be an honorable and respected leader of the Vikings. Sitting in a hotel room high up in Stalheim, Norway, Baruchel and How To Train Your Dragon: The Hidden World director Dean DeBlois look back on how they carried that message throughout the entire franchise.

"This is a real good movie saga for late bloomers," Baruchel tells Romper. "I was one of those people. Mom always told me, 'You're a late bloomer. Your time will come.' I was also very much a square peg and our movies tell you that not only can square pegs do great things, most great people were square pegs."

That's why he would have enjoyed seeing these movies when he was a little kid. "I would have loved that message," Baruchel says. "It's beyond just self belief which I think is ultimately a pretty hollow thing — Hiccup has always believed in something much bigger than him. He believes in making his world better. And he knows he can. That's a pretty important message for kids who might feel at odds with the culture they're born into, turn on the news and feel powerless to make anything better, but they're not."

DeBlois agrees with Baruchel, noting that this franchise has never been more relevant because "it's something that a lot of us are feeling" right now. "And connected to that is the idea of growing up in a society that rejects you," the director adds. "You spend so much of your life trying to assimilate, often in vain, and Hiccup is an example of that: he's never going to be the big, brawny Viking that everyone wants him to be. Our movie celebrates the idea that you can come to the realization that simply by being yourself and actually embracing that thing you're most embarrassed about, you can change the world around you instead of the world changing you."

He pauses and smiles before adding, "That's an empowering message and a truthful one as well. The moment you come to accept what you are and who you are, you can actually begin to reshape opinions and the larger world around you."

Baruchel hates that this kind of message has "for whatever reason gone out of vogue," but that's why he's proud to be a part of something that's bringing it back. "I think Hiccup is firmly in that tradition of antiheroes in a way — he's a hero who seems like an antihero," he says. "I think of him of like Lawrence of Arabia, an oddball that ends up leading his people and affecting great change and becoming a legend as a result. That's a pretty inspirational thing."

How To Train Your Dragon: The Hidden World is available now on Blu-ray and DVD as of it's official release date, May 21, 2019.