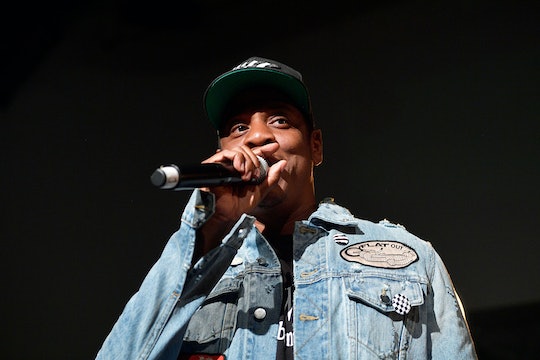 Most women know that if they need a feminist pick-me-up, they can turn to Beyoncé. But who knew her husband was also on a mission to empower young women during his shows? On Sunday night during a 4:44 tour stop in Cleveland, JAY-Z stopped his concert to tell a 9-year-old girl that she could be president one day, and frankly, it was both inspiring and adorable AF.

JAY-Z took a minute to call out an unidentified girl and asked her how old she was. Totally stoked to be called out by the hip hop legend, she put up nine whole fingers and helped him count down to the next song. But before he went into his hit single, "N****s in Paris," according to TheBoombox.com he said:

At this very moment, America is way more sexist than they are racist. But you, young lady, you got the potential to be the next president of the United States. You believe that.

He can be heard saying in the now-viral video circulating the internet, "you can be anything that you want to be in the world." You know, just in case she wasn't looking forward to a life in politics and found some other way to run the world. Not that she needs JAY-Z to tell her what to do with her life, of course.

The father of three kids, two of them girls, seems to be thinking a lot about the state of the world these days. He's been stopping mid-show across the country to address issues such as racism, the justice system, and now sexism.

In Dallas, he stopped the show to talk to fans about fellow rapper Meek Mill's recent prison sentence. Mill was arrested for violating his probation earlier this month, asThe Washington Post reported, and many view the sentence as unnecessarily harsh and emblematic of the bias towards people of color who are arrested. Especially JAY-Z, who said during his Texas stop:

I've got to say something about a young man by the name of Meek Mill. He caught a charge when he was, like, 19. He's 30 now, he's been on probation for 11 years. F*cking 11 years. Judge gave him two to four years because he got arrested for being on a bike and popping a f*cking wheelie.

It's an issue close to his heart. In addition to speaking to fans at his concert about his friend's legal situation, JAY-Z also penned an op-ed in The New York Times, writing:

What’s happening to Meek Mill is just one example of how our criminal justice system entraps and harasses hundreds of thousands of black people every day. I saw this up close when I was growing up in Brooklyn during the 1970s and 1980s. Instead of a second chance, probation ends up being a land mine, with a random misstep bringing consequences greater than the crime. A person on probation can end up in jail over a technical violation like missing a curfew.

Former NFL star Colin Kaepernick, who has drawn criticism for protesting the national anthem by kneeling during NFL games, has also taken up Meek Mill's cause, by visiting with him in jail and tweeting about their visit. Coming full circle, on Nov. 12, JAY-Z also mentioned Kaepernick's protest at his Miami show for the 4:44 tour, telling the crowd:

He's also dedicated his song "The Story of O.J." to Kaepernick on tour and donned a teamless jersey with the football player's name on it in various appearances, even one on Saturday Night Live earlier this fall.

He encouraged black people to start "working together" to make the changes they want to see. Whether it's signing off on Kaepernick's protest, writing op-eds about racial injustice, and empowering young girls, it looks like JAY-Z is already taking his own advice. Or maybe it was Beyoncé's.