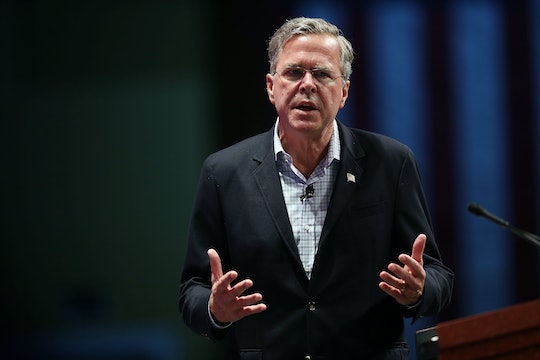 Jeb Bush Thinks Christian Refugees From Syria Should Be Prioritized Over Others, & Here's Why That's Completely Bogus

During an interview with CNN's State of the Union on Sunday, Republican presidential candidate Jeb Bush said U.S. government assistance to refugees from the Middle East should focus on Christians who are escaping persecution. Bush's comment immediately led to the rather obvious follow-up question of how exactly he proposes to screen refugees based on religious status. He maintained that this type of screening presents a "national security challenge," but that we do "a lot" of refugee screening already.

"There are a lot of Christians in Syria that have no place now," Bush added during the CNN interview. "They'll be executed or imprisoned, either by Assad or by ISIS, and I think we should focus our efforts as it relates to refugees on Christians that are being slaughtered." Sunday's CNN interview was followed by a Monday interview on CBS This Morning, during which Bush repeated the sentiment, telling interviewers, "I do think there is a special important need to make sure that Christians from Syria are being protected because they are being slaughtered."

If it seems extraordinarily callous to pick and choose among the 4 million Syrian refugees according to religion, there were many on Twitter today who would agree with you.

But sadly, Bush's proposal to focus on Christian refugees is more generous than the proposals coming from other Republican presidential candidates. Arkansas Gov. Mike Huckabee wants to ban all refugees from the region, and former neurosurgeon Ben Carson proposes stopping all Middle Eastern refugees from entering the United States because jihadists would surely "infiltrate" refugee groups, according to the The Washington Post.

The Presidential candidates' sudden focus on Syrian refugees comes in the wake of news that one of the terrorists in last week's attacks on Paris was able to enter France by posing as a Syrian refugee in Greece, according to CNN. Unfortunately, this oblique connection probably spells heartache for the Syrian refugees. "The Syrian refugee crisis just got worse, due to the Paris attacks," is how CNN reporters Christiane Amanpour and Thom Patterson succinctly summed up the situation.

And indeed, many Republican governors have wasted no time in taking up the mantel. Bush's announcement that he will "focus" only on Christian refugees comes along with announcements from at least eight U.S. governors that they will not allow any Syrian refugees at all into their states. In response to this apparent anti-refugee stance from prominent Republican leaders, President Obama said in a speech on Monday that "Slamming the door in their [the Syrian refugees'] faces would be a betrayal of our values."

And Obama had a message for Jeb Bush and others, including Texas Sen. Ted Cruz, who have proposed accepting only Christian refugees, stating in no uncertain terms:

When I heard political leaders suggest that there would be a religious test for which a person who's fleeing a warn-torn country is admitted... that's shameful. That's not American. That's not who we are. We don't have religious tests to our compassion.

It's unclear whether U.S. governors have the power to truly halt Syrian refugees from relocating in particular states, according to the Times, but at any rate, the suggestion that they should be denied seems to have a disturbing subtext.