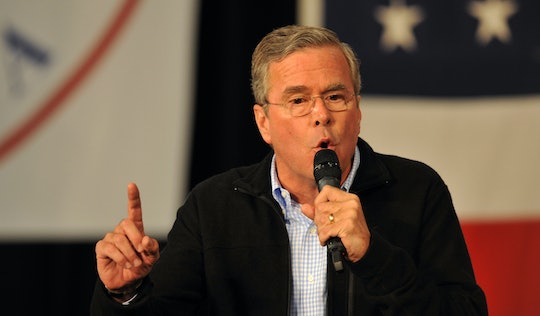 Jeb Bush Totally Admits He's A Bad Performer, But Can He Actually "Fix It"?

If you’ve been watching the 2016 presidential debates, you know that Jeb Bush is pretty awkward. Today, Jeb himself had to admit he’s a “bad performer.” It’s true, but you have to feel for the guy. In an interview on New Hampshire’s Concord News Radio Monday morning he said that the debates aren’t really debates, but performances. He told the interviewer that, “A debate would look a lot different than having 10, 11 people on a stage where gotcha questions are asked. I mean, it is, it is important. I’m not discounting it. I’m not complaining at all. I’m gonna get better at that for sure.”

During the first and second debates, Jeb was criticized for looking a little bored and sounding meek. At last week’s debate, he tried to make himself heard. Instead of playing the nice guy, he decided to Trump it up a little bit and accused Marco Rubio of not “showing up for work.”

But he seems a little torn about that. Though he admits that he wants to “get better” at performing in the debates that aren’t really debates, Bush told a group of supporters in Florida this week that he was sick of the political culture of “yelling into a camera or regurgitating sound bites free of substance.” On one hand, he hates the game. On the other hand, he swears to get better at playing it.

In an apparent effort to do that, on Monday morning Bush released a new book and campaign slogan, “Jeb Can Fix It.” It was a solid attempt at rejuvenating his campaign and his image. But on the Internet, that was never going to work. All day #JebCanFixIt trended on Twitter and not in a good way. It’s an unfortunate sounding phrase, right? Sort of like Trump’s “Make America Great Again.” When did it stop being great?

“Jeb Can Fix It” begs the questions: what’s broken and who broke it? Those questions put the candidate in some tricky spots, and Twitter took it upon itself  to — often hilariously — troll him all day long.

Even Trump got in on it:

Poor guy. He really has not done anything right since he released that goofy campaign logo with the exclamation point. Who’s doing the creative on his campaign? Because that intern has to go before they do any more damage. Bush seems to dig himself into ever deeper holes, although his attempt to pump some life back into his campaign does show that it might not be too late to make a comeback (or show up in the first place, maybe).

There’s still a lot of time before the Republicans pick a candidate in late July. And there are debates all winter long (aren’t you excited?). If Bush really does work on getting his energy up for the next few debates and manages to stop looking like your childhood neighbors’ dorky dad, it might even be possible to start getting some positive attention. But those are a lot of “ifs.”