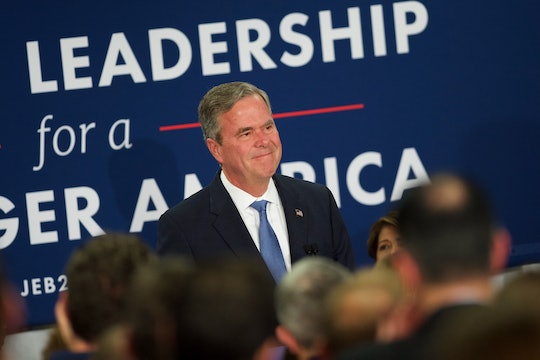 Wait, what?! Jeb? Was that you? To the complete shock of everyone at home, Jeb Bush’s cameo in Jimmy Kimmel’s 2016 Emmys Opener came as a unexpected, but strangely pleasant surprise to viewers tuning into the show. In fact, you could say it was Bush's biggest win of the year! (Which, actually, isn't really that high of a bar, as he seems to be the first to admit.)

Months after the former Florida governor bowed out of the presidential race, he popped up during the opening segment of the awards show — by playing a limo driver who picked up Kimmel while driving Veep's Selina Meyer. "Yeah, I'm in between jobs right now," Bush explained. "Did you know you can make $12 an hour driving for Uber?"

The jokes only continued from there: When Kimmel said he was nominated for an Emmy award, Jeb wondered aloud, "Wow, what's that like?" Then he encouraged Kimmel to run a positive race and allow the people at home to make the right decision, before confirming that was a bit of political sarcasm. Well played, Bush.

That mix of surprise and impressive comedic timing made Bush the breakout start of the opening segment with many at home cheering, "Jeb, exclamation point!"

People at home seemed to need a moment to accept not only that it was Bush, but it was actually Bush being remarkably funny. Some were even wondering if there was time to reconsider the whole election...

Considering the route Bush's campaign took during the past year, there was some concern for how the one-time frontrunner for the Republican nomination was coping. For the most part, he's been laying pretty low, aside from some pointed criticisms at Donald Trump. His most recent broad stance on the election came in May, when Bush said he doesn't endorse Trump.

In November, I will not vote for Donald Trump or Hillary Clinton, but I will support principled conservatives at the state and federal levels, just as I have done my entire life. For Republicans, there is no greater priority than ensuring we keep control of both chambers of Congress. I look forward to working hard for great conservatives in the Senate and House in the coming months.

Although the election in general clearly didn't shape up the way he wanted, his appearance in the opener for the Emmys went to show that it is possible to still keep your head up.