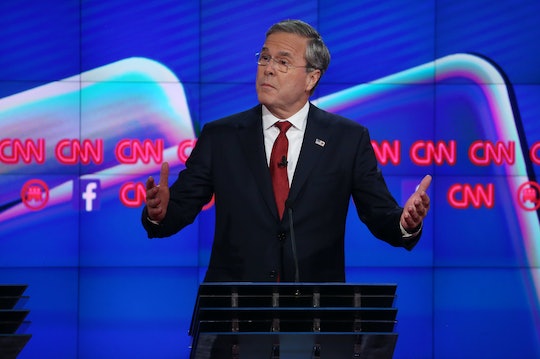 A million debates later, and it seems like Jeb Bush still can’t get the whole debating thing down. Even though the former Florida governor isn’t out of this race by a long shot, it just seems like these type of events aren’t his strong suit. And this is certainly starting to affect his campaign. Tuesday was a much, much stronger debate showing for the former Florida governor, but Jeb Bush's closing statement at the GOP debate didn't quite pack the punch he brought the rest of the evening.

So what has Bush been up to when he’s not exactly killing it on the debate scene? Well, he’s trying to sell himself as the national security candidate. "The world has been turned upside down," Bush said at a Florida town hall event earlier this month. "We have this existential threat now that people sense. And because of that, we're getting more serious about who we're going to pick." Following months of dwindling polls, Jeb wants to be seen the hopeful that may not have a bark but is all bite. So it’s not shocking that he is so focused on talking policy instead of rhetoric during debates and elsewhere. But don’t be fooled — he’s totally up to knocking his greatest adversary, Donald Trump, down a few pegs when given the chance. Bush said of the Trump’s intentions to meet Israeli Prime Minister Benjamin Netanyahu:

Look, the guy's not serious. He's not a serious person. He can't be commander in chief. He doesn't have plans. This is all dog-whistle talk. This is to provoke anger. This is to — with all due respect to the media — this is to generate massive attention to him. It's not about a serious plan. Is that a serious plan in all reality? Of course not.

Though he's criticized for being bland, Jeb certainly knows how to throw a ton of shade on Twitter.

It was great to see some of that fire come out during the debate Tuesday night, so viewers may have expected a Jeb Bush closing statement that stayed with viewers and reestablished him as a serious contender in the race. Here's what he said when the moment came:

Ask yourself which candidate will keep you and our country safer, stronger, and freer? Hillary Clinton has aligned herself with Barack Obama on ISIS, Iran, and the economy. It’s an alliance doomed to fail. My proven record suggests that — and my, my detailed plans will fortify our national and economic security, and my proven record as governor makes — will give you a sense that I don’t make false promises. I deliver real results. For America to be safe and sound, I ask for your support. Thank you all very much.