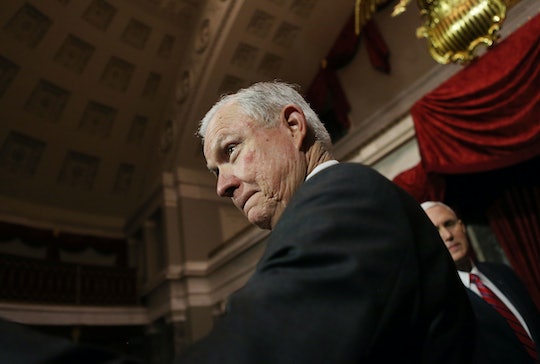 A Washington Post report released on Wednesday night stated that current Attorney General Jeff Sessions spoke twice with Russia's ambassador to the United States in 2016, despite Sessions' earlier claims that no one in the Trump administration had communicated with the Russian government, to his knowledge. The news comes as calls from the Hill for an independent investigation into the matter grow. According to the report, one of the meetings took place while Sessions was still a senator, as a member on the Senate Armed Services Committee.

Update: In a statement to Romper on Thursday, a Justice Department spokesperson reiterated Sessions' comments from Thursday morning, quoting him as saying, "I never met with any Russian officials to discuss issues of the campaign. I have no idea what this allegation is about. It is false." The spokesperson also quoted Isgur Flores' earlier statement to The Post, saying, "Last year, the Senator had over 25 conversations with foreign ambassadors as a senior member of the Armed Services Committee, including the British, Korean, Japanese, Polish, Indian, Chinese, Canadian, Australian, German and Russian ambassadors. He was asked during the hearing about communications between Russia and the Trump campaign--not about meetings he took as a senator and a member of the Armed Services Committee."

The report, which cited unnamed Justice Department officials, stated that "one of the meetings was a private conversation between Sessions and Russian Ambassador Sergey Kislyak that took place in September in the senator’s office, at the height of what U.S. intelligence officials say was a Russian cyber campaign to upend the U.S. presidential race." The other meeting reportedly took place "in a group setting with other ambassadors" following an event held by the conservative Heritage Foundation in July, the AP noted. The event was run "on the sidelines" of the Republican National Convention and was attended by some 50 ambassadors.

According to the report, "a small group of ambassadors approached Sessions as he was leaving the podium, and Kislyak was among them." Sessions reportedly spoke with Kislyak individually, Justice Department officials told The Post.

The second conversation between the two reportedly came on Sept. 8, again while Sessions was acting in his capacity as an Armed Services Committee member. Of note, The Post reported that it had contacted "all 26 members of the 2016 Senate Armed Services Committee to see whether any lawmakers besides Sessions met with Kislyak in 2016" as well, and found that none of the 20 senators who responded had held any meetings with the Russian ambassador.

Critics now have ammunition in their calls for Sessions to recuse himself from any potential investigations into allegations that high-ranking members of Trump's administration had conversations with the Russians over the course of his campaign, or to appoint independent counsel. Previously, Sessions claimed in his Senate confirmation hearing that he was "not aware of any of those activities," referring to claims that Trump affiliates had communicated with Kremlin officials. "I have been called a surrogate at a time or two in that campaign and I did not have communications with the Russians," he clarified in that same testimony.

Sessions spokeswoman, Sarah Isgur Flores, told The Post that "there was absolutely nothing misleading" about the answer he gave the Senate confirmation panel. "He was asked during the hearing about communications between Russia and the Trump campaign — not about meetings he took as a senator and a member of the Armed Services Committee," she said.

Sessions spokeswoman, Sarah Isgur Flores, told The Post that "there was absolutely nothing misleading" about the answer he gave the Senate confirmation panel. "He was asked during the hearing about communications between Russia and the Trump campaign — not about meetings he took as a senator and a member of the Armed Services Committee," she said.

Condemnation of the revelations unearthed by the report were swift. "Misleading the Senate in sworn testimony about one own contacts with the Russians is a good way to go to jail," Richard W. Painter, chief White House ethics lawyer under President George W. Bush, wrote in a tweet on Wednesday night.

Minnesota Sen. Al Franken (D), who, along with Sen. Patrick Leahy of Vermont, initially asked Sessions about Trump surrogates' alleged communications with the Russian government, spoke out on Wednesday night as well. "If it's true that Attorney General Sessions met with the Russian ambassador in the midst of the campaign, then I am very troubled that his response to my questioning during his confirmation hearing was, at best, misleading," Franken stated. "It is now clearer than ever that the attorney general cannot, in good faith, oversee an investigation at the Department of Justice and the FBI of the Trump-Russia connection, and he must recuse himself immediately."

Though Trump was not acting in any official Cabinet capacity at the time of either meeting, he was acting as one of Trump's top policy advisers, as The Post noted. On Wednesday, the White House responded to the report as "the latest attack against the Trump Administration by partisan Democrats," according to CNN. "Sessions met with the ambassador in an official capacity as a member of the Senate armed services committee, which is entirely consistent with his testimony."

The Post report comes just one month after Trump's former National Security Adviser Michael Flynn resigned his post over allegations that he misled the White House over the nature of phone calls he shared with Kislyak in the months prior to his appointment.