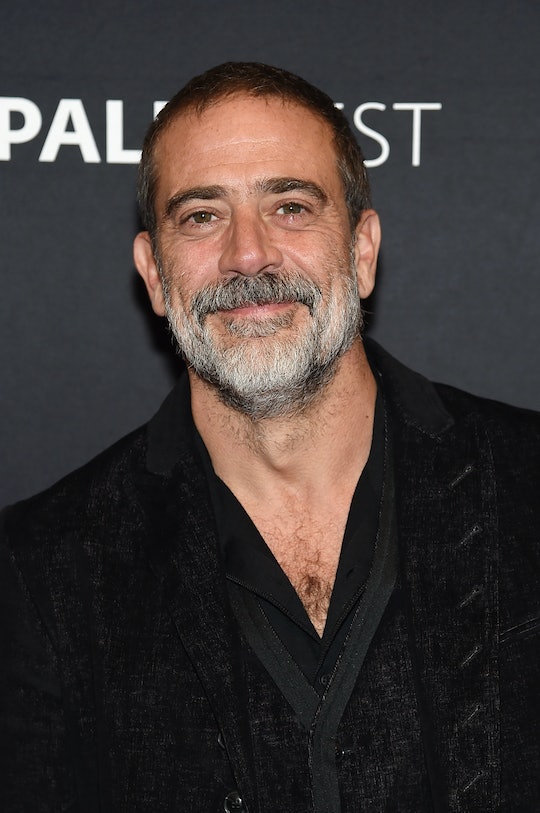 A successful working actor like Jeffrey Dean Morgan is typically known for always traveling to film, which would likely be amazing if he were single. But for a devoted dad such as this one, home is really where the heart is. That's why The Walking Dead star returned home to his family for his 53rd birthday. Now, Jeffrey Dean Morgan's new photos with baby George reveal he had the best birthday ever with her and her big brother, Gus.

Morgan got to take a breather from shooting a new movie across the pond in Norway, as he shared on Instagram. This gave him the chance to celebrate with his adorable family, including wife Hilarie Burton (of One Tree Hill fame), daughter George Virginia, 1, and Gus, 9, as People reported. In new photos, Morgan is seen reuniting with his kids, and it's such an emotional moment. You can see the love radiating off of Morgan as his little ones give him a big welcome home hug.

In the next shot, everyone poses for the camera together, followed by a shot with Morgan snuggling his one-year-old daughter, whom UPI reported, as per People, that he helped deliver at home with the help of a midwife. The final shot shows Morgan blowing out his birthday candles with the help of George, who is clad in a pink tutu and covered in frosting.

"Home. So. Damn. Happy," the actor captioned the shot, which fans enjoyed.

"Wishing you all some good rest and lots of loved up moments, amigo," wrote one, while another commented, "So precious."

Many fans and friends wondered when Morgan had to leave the fam again to shoot Season 10 of The Walking Dead. (Which should be soon, if the new episodes launch in the fall on AMC as they have in previous years, as per Digital Spy.)

Hopefully Morgan has a long enough break to really enjoy spending quality time with his family. His love of domestic life is no secret thanks to all of the sharing he does on social media, especially Instagram. If Morgan isn't posting about his wife or his kids, he's posting about the many different animals they have living on their farm. We'll call those his "other" kids.

Something else Morgan has been open about? Helping Burton give birth to their children naturally, as he recently discussed with PEOPLE.

“The first time I didn’t know, I was shocked that I was part of it. I thought I was going to hold the leg, tell her to hopefully breathe and I wasn’t ready when I took my position," Morgan recalled, referring back to Gus's birth. "This time I was a little bit more prepared and got in and got her out immediately. As soon as her head breached I reached in there, grabbed her by the cheeks and got her out. Hilarie was over it, so it was awesome. I got to deliver both my kids, for real, it was cool.”

Here's to hoping Morgan and his family make plenty of exciting new memories during his downtime.