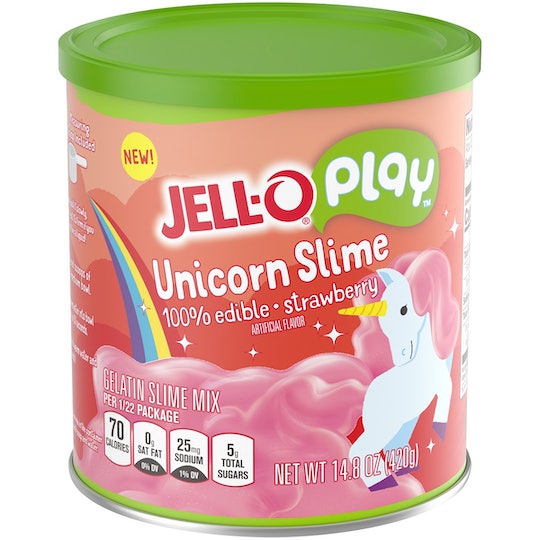 Dealing with your kid's slime obsession is about to get so much easier. Making an ooey gooey batch of slime at home from scratch can be messy, time consuming, and potentially even a little dangerous, but JELL-O's new edible slime mix could change that.

The directions couldn't be easier: just add water, and you'll have a batch of slime that kids can twist, stretch, shape, rip, and even eat (and whatever else it is that kids do with slime). It may be mystifying to adults, but kids seriously love their slime, and it seems to be a worldwide phenomenon. Google noted that "how to make slime" was its most searched DIY in 2017, and slime videos have wracked up millions of views on YouTube. It was so popular that the sales of two of the main ingredients in many homemade slime recipes, glue and borax, shot up according to Fortune. Even young entrepreneurs cashed in on the slime craze, with one teen making six figures with an Etsy slime shop according to CNBC.

Getting homemade slime just right can be a little dicey, however. Borax helps give homemade slime its consistency, but it appears that it's not the safest ingredients for kids to be handling without gloves on. People reported last year that an 11-year-old girl suffered burns to her hands, which was apparently due to borax exposure from the slime she was making. Since JELL-O's edible slime is made to be eaten, it's a pretty safe bet that it won't lead to any burns, and you really can't mess up the recipe as long as you follow the directions.

Homemade slime has also been known to leave behind quite a mess, which is another reason why lots of parents are totally over the craze according to Simple Most. JELL-O's edible slime claims it can be easily cleaned up with soap and water, so hopefully it's not nearly as much of a headache as the homemade variety can be.

JELL-O Jigglers was the closest I ever got to playing with my food as a kid, but the household name has got quite a few products these days that kids can have fun with. The JELL-O Play line launched this summer with kits that let little ones make edible JELL-O building blocks that can be made into anything from a plane to a turtle to a train.

My daughter is too young to really be into the slime craze, but now that there's an easily available option that's not going to have me frantically calling Poison Control if she eats it, I just might check it out. One can of JELL-O Edible Slime costs $9.99, and makes two batches. It's available in two flavors: pink strawberry Unicorn Slime, and lime green Monster Slime. I can't vouch for how it tastes, but it does pack 290 calories per serving, so I'm assuming it's filled with all the sugary goodness and flavor you'd expect. It's available on Amazon now, and will be in select stores starting next month, making it a great holiday gift option for any little slime fiends on your holiday shopping list.