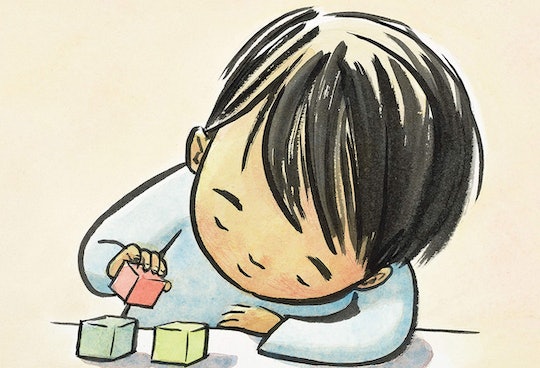 We all have anxieties and concerns when making a new friend: what if I forget their name right after they tell me what it is, what if they're bad at keeping secrets, what if they think my Harry Potter obsession is weird? But Jenn Bailey's new picture book A Friend For Henry (Chronicle Books) sheds light on more nuanced friend-related problems, telling the story of a young boy on the autism spectrum who is on a mission to find a buddy at school. The book, illustrated by Mika Song, dismantles the problematic trope that children with autism prefer isolation by giving us a hero who craves intimacy. Romper got the scoop from Bailey on her inspiration for the book, her experiences as a mother, and what ultimately led her to write the story she "was avoiding writing" for years.

Bailey was informed by the experience of her 22-year-old son Harris in creating the story. Growing up, Harris often encountered neurotypical children and adults who didn't understand his thought process, so Bailey set out to tell the story from the perspective of a child on the autistic spectrum. "If there could have been a way to have explained to my child's classmates how hard he was really trying and what it was like for him... I thought it could have been easier for him," she tells Romper by phone.

However, Bailey didn't feel able to create the book until her son had grown up: "I was too close, and it was too difficult, and I don't think that I could have told it when Harris was in elementary school because I would have wanted to be the mom in that story."

In the thick of it, she fears she would have focused on the parental experience rather than that of the child. Now an adult, Harris was able to weigh in on her assumptions about Henry's thought process, and help the book capture something authentic.

A Friend For Henry takes readers to classroom six, where Henry is struggling to find the perfect friend. Bailey walks her audience through Henry's thought process as he hunts for a playtime pal, showing us his careful search for someone who shares, who likes the swings, who likes reading time as much as he does. The book does a remarkable job of shedding light on how easily Henry's actions can be misinterpreted, giving readers insight into how kids on the spectrum think differently.

By walking her readers through Henry's thought process rather than Vivianne's, Bailey flips the traditional narrative of a neuroatypical child having to work to understand their neurotypical peers, validating Henry's experience. So often conversations about neuro-divergencies happen about people on the spectrum rather than with them, and excluding those on the spectrum enables the perpetuation of incorrect and harmful narratives much of the public has about autism.

As Bryan Chandler wrote for The Mighty, "As an adult with Asperger’s syndrome, the general public’s perception of autism makes me want to fall into my shell and recluse myself from the world. So my advice would be to stop talking and start listening to those on the spectrum."

Bailey hopes her story adds a new layer to dialogue about the social interactions of those on the autism spectrum disorder, saying she wanted her readers to see that "Henry is actually thinking about a great deal of things when he meets somebody, and he's trying to find that thing that he thinks will be the way that he can make this friend."

"Once you're put on the spectrum, bending rules doesn't always apply to you, like it does to a child who's not neurodiverse," she explains, voicing her frustration with the way society pigeonholes those with autism. For children who are neurodiverse, the spectrum is often blamed for mood swings or imperfect behavior, even though these things can be part of the normal range of human emotions and experience.

Indeed, in a piece for The Salon, Matthew Rozsa, who has Aspergers syndrome, wrote, "because we view being neurotypical as 'normal' and being autistic as 'abnormal,' it is easy for autistic individuals' problems to minimized, ridiculed or dismissed."

Bailey echoes Rosza's analysis in our conversation: "the rest of us can get a pass a lot of times, and these children often don't."

And that's the very point of Henry's story: autism is just one piece of the puzzle, not the explanation for every thought and feeling those on the spectrum have.

He's just another kid trying to make a friend in classroom six.