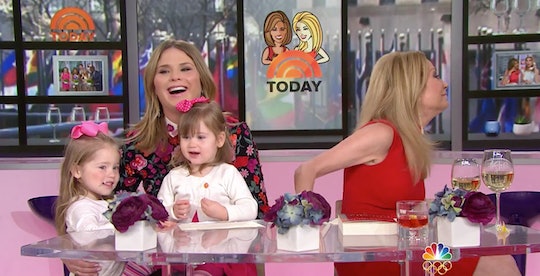 If you've ever been in a pinch and were forced to take your child to work, then chances are, things weren't exactly the most productive. In fact, I'm willing to bet it was downright maddening. Staying on top of the responsibilities of your job in addition to attempting to keep your young kiddos entertained and out of trouble is like a huge identity crisis. How can I remain professional while also tending to my child's needs? Who am I, even? Who thought this would be a good idea in the first place? Don't feel too badly, working parents. Because Jenna Bush Hager's daughters crashing the TODAY show on Monday is something all parents can relate to.

It all went down when Jenna Bush Hager decided to bring her daughters, Mila, 4, and Poppy, 2, to work with her on Monday morning, Us Weekly reported. The girls were sitting with their dad, Bush Hager's husband, Henry, in the audience while their mom was filling in for Hoda Kotb. No big deal, right? Wrong. Kathie Lee Gifford was talking with Bush Hager about the 36-year-old's recent trip with her husband when it happened.

"Mama has a cat!" Poppy yelled from the studio audience. Poppy and Mila are soon seen joining their mom while cameras continued rolling. And of course — as young children often do — Bush Hager's little ones immediately fixated on something. And they would not let it go.

"Ya'll, I don't even have a cat anymore," Hager admitted, trying to keep her composure. Nevertheless, the two adorable sisters took turns shouting, "Mommy has a cat!" And because the audience laughed every time, they just kept right at it.

"You know what? You deserve this," Gifford pointed out, as reported by Today. "This is what your parents said you did your whole life growing up." Ouch. It seems Bush Hager's kid karma finally caught up to her.

"Do any of ya'll ever feel like this when you're trying to do work and you have two kids hanging on you?" Bush Hager asked at one point. (Um, yes. Every single day of my life.)

The girls' dad eventually convinced Mila to return to her seat. But little Poppy was having none of it. Ultimately, Bush Hager hastily handed over her youngest daughter to a personal assistant. And you can probably guess what happened next — the hashtag #mommyhasacat instantly became a thing on Twitter, with parents and non-parents alike chiming in with their reactions. One Twitter user wrote, "Not just the #momyhasacat but the hand off... I’ve been there, get this sweet child away from me! Best morning mom TV!"

Another person tweeted, "OMG! @JennaBushHager you are a trooper! You are every mom who is trying to get anything done ever."

Yet another Twitter user wrote, "@JennaBushHager Panicky[sic] shoving your kid at a PA so you can carry on with work! You are my hero. No worries mama! We’ve all been there! #mommyhasacat"

Another person likened Bush Hager's experience to that of Robert Kelly — the political science professor whose live BBC interview was crashed by his two adorable children.

As a mom of three, I can relate so hard to Bush Hager's mom moment. (Granted, it's never happened on live television.) When I had a job outside of the home, I was forced to bring a child or two along with me to work a few times. (Usually, it was because of a babysitter emergency.) I worked at a small newspaper, so it wasn't a huge deal. But still. Trying to doing anything productive was quite the task that one time I had my then 3-year-old son and infant daughter to keep entertained — and from unintentionally destroying things. (My son might have broken a calculator, but shhh.)

Still, Bush Hager handled the overwhelming situation was laughter and grace. So kudos to this amazing mama for not losing her sh*t on live TV. Judging by the overwhelmingly positive reactions to the girls crashing the show, have a feeling Poppy and Mila could be making more Today appearances in the near future.