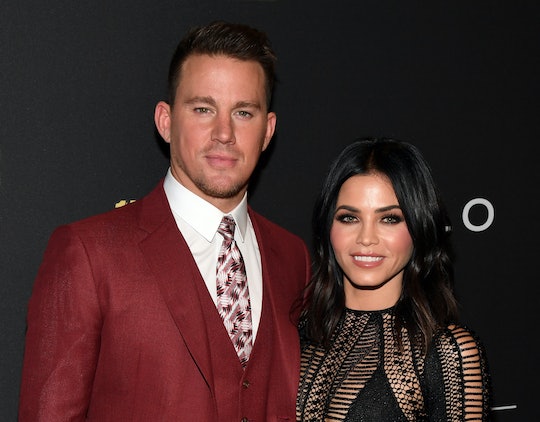 Dewan and Tatum's intent to co-parent peacefully was evident from the start, as seen in their joint statement about the breakup. "We are still a family and will always be loving dedicated parents to Everly," they said about co-parenting their daughter, Everly, according to E! News. "We won’t be commenting beyond this, and we thank you all in advance for respecting our family’s privacy."

Then in the weeks following their very public split, Dewan talked to Harper's Bazaar about adjusting to the new normal. "We’re just getting used to it. We're in a very positive energy together, trying to be the best parents to Everly. We support each other," Dewan told the outlet. She also explained in the same interview that their co-parenting situation is full of "love," adding that she and Tatum are figuring things out with a new "flow."

For Tatum, it's all about structure and he's doing his best to provide that for Everly. Case in point: In January, Tatum requested an official visitation be put in place, as court docs revealed. “In my opinion and experience, Everly has appeared to adjust to our separation and living in two homes exceptionally well,” Tatum stated in court documents, according to The Blast. “I believe that she will thrive even more with structure and consistency because she is happy and more relaxed when she knows a plan.”

And even though both might be dating other people, they remain supportive of one another. In a Mother's Day Instagram story earlier this year, Tatum said, "Jenna, happy Mother’s Day, baby. Mama, happy Mother’s Day. I hope you’re enjoying this beautiful sunset. Love you guys.”

Not to mention, Dewan pretty much summed things up when she said, "Ultimately, no matter what Chan and I are doing, we're really great friends. I think that will never change, no matter what," according to Harper's Bazaar.

But wait — that's not all. Despite the separation, Tatum and Dewan still go on outings together with Everly as a family. Last Halloween, the two donned costumes and trick-or-treated in their Los Angeles neighborhood and Everly was all smiles as she held both of her parents' hands, according to People. And that's another form of stability that benefits Everly, thanks to Tatum and Dewan vowing to do the best they can as parents even if they are separated.

Let's just say that Everly is one lucky girl, especially in a world where celebrity breakups can be rife with drama. It's amazing her mom and dad are working to co-parent in a way that benefits all three of them. And when baby number two arrives, I have no doubts things will remain the same. So here's to Tatum and Dewan for making this co-parenting thing look so easy.