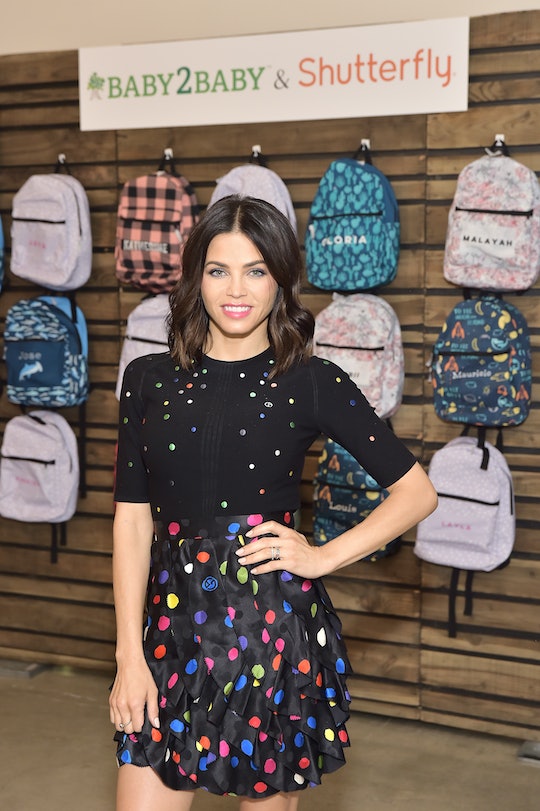 The sandy, ice plant-covered cliffs in the photo roll down to a tranquil ocean where Jenna Dewan and her daughter play in the water. “We jumped waves and saved exactly 45 mermaids,” reads the post from Dewan’s Instagram. She is smiling with her arms stretched over her head and toes pointed, mimicking her daughter’s movements in the wave break. The photo captures the two things about Dewan that detractors find so impossible to reconcile, and the two things fans love best: her dedication to being a parent, and her willingness to post a spirited bikini pic.

Avowedly body-positive, Dewan has been on the receiving end of trolls who deem her Instagram feed too “provocative” for a mother. She easily shakes it off. “Why is it that we become moms and we have to forget that we're sexual, empowered women. No! Feel confident in your skin,” Dewan tells Romper at an event in Los Angeles, California. And for her, what that means is as unique as each woman is. “Being sexy is being a woman, and that's being in your body, that's being confident. That's feeling good about yourself and however you want to express that.”

Jenna Dewan is a force in the entertainment industry. This year she’s already starred in two films, Berlin, I Love You and The Wedding Year. She’s also taken a part in the Netflix musical series Mixtape, due out later this year. She’s had a recurring role on the FOX medical drama The Resident, and hosted two seasons of World of Dance on NBC. Dancing has shaped Dewan’s life. She got her start when she appeared in Janet Jackson’s music videos for “Doesn’t Really Matter” and “All for You,” and toured with Ms. Jackson in 2001.

A few years later she took on her iconic role in Step Up, where her fluid moves made her a breakout star. The white-hot chemistry with her co-star, Channing Tatum, both on and off the screen was the equivalent of #couplegoals for the aughties. They spent nine years together, and have a 6-year-old daughter, Everly. When they announced their decision to separate last year, the internet wept.

The split brought on all kinds of changes for Dewan. “Everly became my number one priority. And so job opportunities that would come had to sort of fit into my new priority list.” Lots of new parents would understand what she means. She describes the shift as “a natural change that happens when you have a child. It wasn't difficult, it was just different.”

The split brought on all kinds of changes for Dewan. “Everly became my number one priority."

Navigating conversations with an ex presents a unique set of challenges, especially when searching for common ground for co-parenting. Dewan says that successful co-parenting is all about keeping the love and respect ever present. “I think that communication is key, always. Keeping all your communications elevated and in a place of goodwill, and knowing that situations might change, but making sure the love for your child stays there.” These are all values that she wants Everly to take with her, too. “I love her to feel confident, to feel empowered, to feel loved. All these things are the sort of values that I try and do my best to instill in her every single day: to believe in herself, but also have empathy for the world.”

This morning she’s putting those beliefs into action. We’ve gathered in central Hollywood for a July 16 event presented by Shutterfly in partnership with Baby2Baby, an L.A.-based organization dedicated to providing children living in poverty with necessities like diapers and clothes. Dewan has worked with the organization since 2015. As an “Angel” for the organization, she works with the Board of Directors to organize drives and events, develop relationships with corporate sponsors, and lead social media campaigns. The organization's other Angels include Jessica Alba, Drew Barrymore, Zoe Saldana. It was the sole U.S. organization on the baby registry for the Duke and Duchess of Sussex ahead of the birth of Archie last year, per The Hollywood Reporter.

For today’s party, Baby2Baby and Shutterfly have bussed 40 kids from the neighborhood of Watts in southern Los Angeles to eat pizza and ice cream, play games, and pick up personalized school supplies. As they arrive they’re invited to sit around a couple of “mad scientists” and enjoy an interactive show, capping off with the kids gazing at a smoking bucket of dry ice with amazement as Michael Jackson’s Thriller drones from the speakers.

Dewan enthusiastically chats with the kids, taking time to talk to each of them. She helps them stuff their personalized backpacks full with markers, notebooks, and takes a couple of videos for her Instagram — spreading word about the cause is high on her list of priorities.

“As soon as I became a mother, I understood the importance of families having essentials, and the idea that there are families out there that are not able to get access really bothered me,” she says.

We're not just living in our own world that's right in front of us. I want to know what's going on.

In this city, that need can’t be ignored. Los Angeles reported 44,214 homeless people living on the streets without shelter this year, and nearly a thousand of them are children. “We live in a city where it's right in your face. It’s something that I think about a lot,” Dewan says. “I say this all the time, we're in this together. My life is not separate from your life or someone who is homeless. You can't live in it in a box of your own.”

Her work on the issue isn’t limited to carefully curated events in Hollywood. She makes a point to get out into the trenches, and makes it a family affair. “My daughter and I, for Thanksgiving, we went down and we did the soup kitchen,” she recalls with a smile. “She got to see that sort of way of living and she asked a lot of questions.”

This is exactly the kind of teachable moment Dewan relishes. “You have to explain how that happens and that not everyone is as fortunate and that we need to help others. I like setting that example and starting those traditions earlier so it becomes something they think about as they grow up.”

“We need to think about the outside world. We're not just living in our own world that's right in front of us. I want to know what's going on. I don't have all the solutions, but I think we can all do the best we can to help.”

When she's not out saving mermaids, anyway.

More Like This
The “Tripledemic” Is Scary, But I Feel Less Helpless When I Wear A Mask
Meena Harris’ New Children’s Book Tells ‘The Truth About Mrs. Claus’
Julia Roberts Shared A Rare Photo Of Her Twins Hazel & Finn On Their 18th Birthday
Hilary Duff Cut Her Daughter Mae’s Hair & Gave Her The Most Adorable Bangs