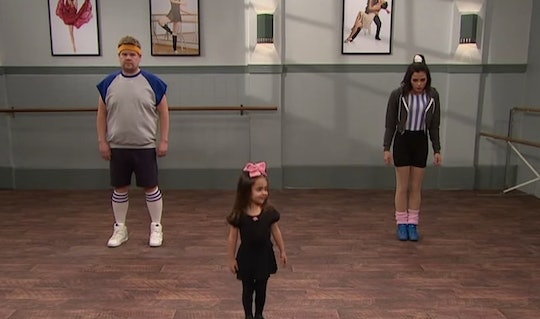 Are you ready for the cutest damn thing you will see today? (No? OK. I’ll wait. Ready now?) Good. Because “toddlerography” — the art of dancing like a little, little kid, as taught by a little little kid— may in fact be the next dance craze thanks to The Late Late Show host James Corden, actress and dancer Jenna Dewan-Tatum, and three "mini" choreographers. That's right, earlier this week, Dewan-Tatum danced with toddlers and it was awesome and adorable.

Featured — and possibly created — on The Late Late Show with James Corden, toddlerography is exactly what it sounds like: a toddler led dance lesson. (I say “possibly” since I have been a student of “toddlerography” for nearly a year and counting.) And while I have had my fair share of exhausting (and nauseating) dance lessons with my own tyke, they pall in comparison to the rigorous routine Dewan-Tatum and Croden attempted to Sia's "Alive."

When the segment begins, Dewan-Tatum looks fairly confident she’s “got this,” but she and Croden quickly learn there is more to “toddlerography” than one may imagine. Sure, there is running and jumping, an absurd amount of spinning, and kicking, but these kids also break dance and run into walls — literally! Naturally, Dewan-Tatum stepped up (get it?) to the plate, making every move look, and feel, professional but c’mon: would we expect — or accept — anything less from the Step Up star?

But that doesn't mean Dewan-Tatum didn't struggle. Earlier Thursday, the actress-dancer took to Twitter to express just how difficult the experience was:

While Dewan-Tatum is best known for her role in Step Up, she has also starred in Tamara, Take the Lead, American Horror Story, and — most recently — on Supergirl. And before hosting The Late Late Show, Croden appeared in Into the Woods and as one of my favorite guest characters in Doctor Who history, Craig. (Aw, Craig!)

But if you are thinking of trying “toddlerography,” be warned: It is not for the faint of heart. You will sweat. You will struggle to catch your breath. Parts of your body will hurt that you didn’t know you had. And, when all is said and done, you will need a nap — no joke! – but you will also smile. You will laugh, and you will undoubtedly have fun.