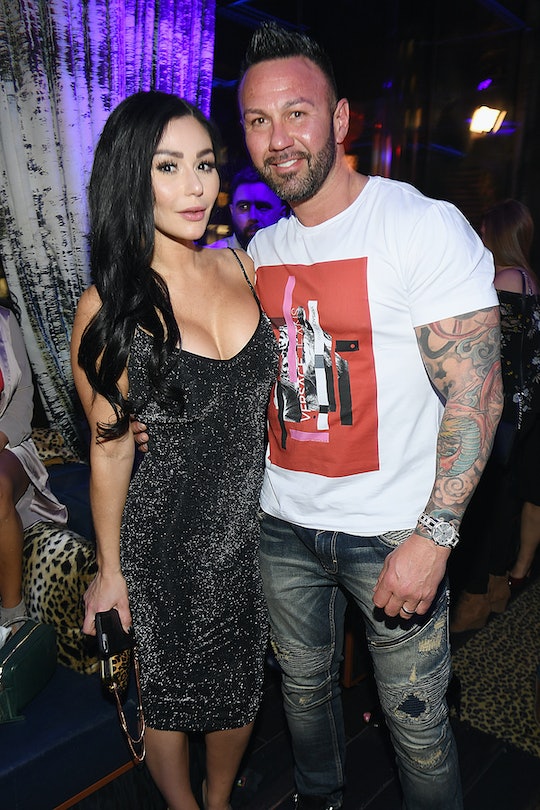 It's never easy to endure a relationship breakup when you share young children, but it sounds like things have become particularly difficult for Jersey Shore star Jenni "JWoww" Farley and her estranged husband, Roger Mathews. In September, Farley reportedly filed for divorce from her husband of three years, but after the two got into an argument Thursday night, according to People, Jenni "JWoww" Farley filed a restraining order against Roger Mathews, after police ended up becoming involved.

Together, Farley and Mathews share two children, 4-year-old daughter Meilani, and 4-year-old son Greyson, and despite their September split, the couple seemed to be working hard to present a united front. In October, in fact, Mathews even dedicated a sweet Instagram post to Farley in honor of their third wedding anniversary, according to E! News, a month after vowing he would "win her love back" as he had "no intentions [of] being a single dad."

The situation certainly seems to have taken a turn this week though, as Mathews alleged in an Instagram video Thursday that Farley became "completely and uncontrollably emotional" during an argument about her work schedule, which ended in Mathews calling the police. Mathews claimed he involved the authorities to prevent Farley from "[making] some sort of false police report," but said he was informed at around 2 a.m. early the next morning that his wife had ended up filing a restraining order against him.

Editor's Note: The Instagram video has since been deleted.

In a statement on Instagram Friday, Farley's rep responded to Mathews' claims, and said that her decision to pursue a restraining order was "in her best interests, and the best interests of her children." The statement also refutes Mathews' subsequent allegations on social media — including that Farley has "made [their] children pawns" in their split, and that she "literally turns [their children] against him" — calling his claims "entirely false, misleading, and intentionally designed to cast Jenni in a negative light."

Though the former couple clearly does not see eye-to-eye on the details of the incident, the Toms River Police Department has confirmed the story, and told People, that police were dispatched to the couple's home around 1 a.m. regarding "a civil matter," and that "Mr. Mathews was served with a Temporary Restraining Order and provided transportation to another location" (Romper's request for comment was not immediately returned).

While Mathews definitely didn't hold back about how felt towards Farley following the incident, he claimed in a later video that he'd come to the decision to open up on social media because he felt that "putting the truth out there weighs in [his] favor," and in a follow-up clip, a visibly emotional Mathews spoke about how upset he was that he wasn't allowed to see his children. He said, "if anyone on the face of this planet ever says that I was not there for my kids everyday of their [lives], they're a liar ... I'm always there for my children."

Editor's Note: The Instagram video has since been deleted.

While it's pretty clear that Farley and Mathews both have extremely different takes on what actually transpired Thursday night and why, it does sound like they have definitely gone through their share of relationship ups and downs in the past. In her divorce filing, for one, Farley reportedly indicated that she and Mathews had been having significant marital issues for "at least six months," according to Us Weekly, and sources told the magazine that they didn't always agree when it came to living their lives in the spotlight.

That's not all though: in an October episode of Jersey Shore: Family Vacation, Farley revealed that they'd actually come close to divorce in the past. After Angelina Pivarnick admitted her fiancé Chris Larangeira was concerned about her being in the house with Vinny Guadagnino, according to People, Farley said,

That’s like, a masculine thing. His fiancée is in a house with dudes that are single. It’s a whole insecurity thing. No man is secure in this type of sh*t, it’s just not a thing. We’ve all been there ... Mine almost led to divorce.

Regardless of what the future holds for Farley and Mathews, given that they share two young children together, hopefully they will at least be able to find some common ground. Although it's definitely not always easy to bury the hatchet, the more than can figure out a coparenting strategy that works, the better off their children will be — whether or not they stay together as a couple.