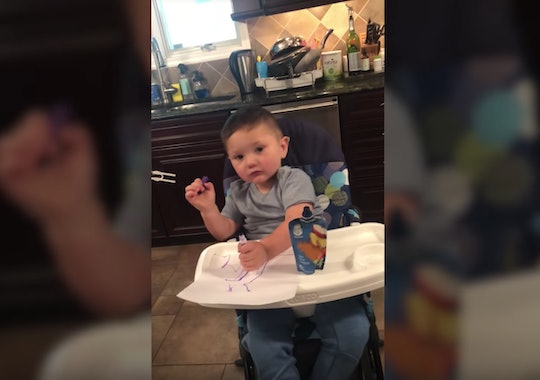 Over the last few months, Jenni "JWoww" Farley has been open and honest with her fans about her 2-year-old son Greyson's journey with delayed speech on social media as well as on Jersey Shore Family Vacation. And as this year comes to a close, Farley shared an update on her son's speech progress and it's truly heartwarming to see how far he's come.

On Christmas Eve, Farley shared a video in which she compiled clips of Greyson struggling to speak over the past year. In the beginning of the video, Greyson struggles to respond to his mom and repeat certain words. But, halfway through the video, you can not only see Greyson progress, but you can hear him too. He can be heard repeating words, counting, and smiling because of his accomplishments. It's incredible to see how far Greyson has come.

Sure, fans have heard about Greyson's struggles on Jersey Shore Family Vacation, but to finally put a visual to it allows fans to really understand where Farley is coming from when she talks about her son's troubles and triumphs. "I'm so excited to share this video with you all documenting the progress that Greyson has made throughout this past year," Farley wrote. "I'm so proud of him and thankful for everyone's love and support throughout this past journey."

Not only can you see and hear Greyson's progress in the video, but you can also sense how much Farley has changed through their journey as well. In the video, Farley can be heard being frustrated at first, but then getting happier and more relieved as time goes on.

Fans also noticed this, taking to the comments of the YouTube video to share their support for the Jersey Shore star.

"God bless him!" one commenter wrote. "We are all so proud of you Bubbie."

"You're doing something awesome with Bubbie," another commenter added. "Keep it up."

"His progress in only a few months is amazing to see!! Can't wait to see what 2019 brings," another commenter stated.

Farley's openness with fans about her son's journey (and willingness to document it on video) has the ability to help so many parents out there who may be going through similar experiences with their own children. But it wasn't until this year when Farley was able to open up about Greyson and his diagnosis for the first time.

In an interview with Hollywood Life, Farley shared that her son had been diagnosed with autism, saying:

He has co-therapies every week, but we're going to step it up a notch soon and get him ABA treatments, speech therapy. He's made leaps an bounds when it comes to speech. He's understanding words better now, which was his issue.

In October, Farley told TODAY, that her life completely shifted when she noticed her son was struggling. "I have to live my life now through the eyes of a 2-year-old who doesn't speak," Farley said. "And until he speaks, that's my priority."

In that same interview, Farley revealed that she had felt alone and as a celebrity, she had been hesitant to share anything more. "As a parent, you only want to share the best of the best [on social media]," she told TODAY.

But so much has changed in the past two months, and Farley's willingness to share so much of her life and her son's progress on social media has been amazing, and it undoubtedly helps other parents feel less alone in their own journeys.