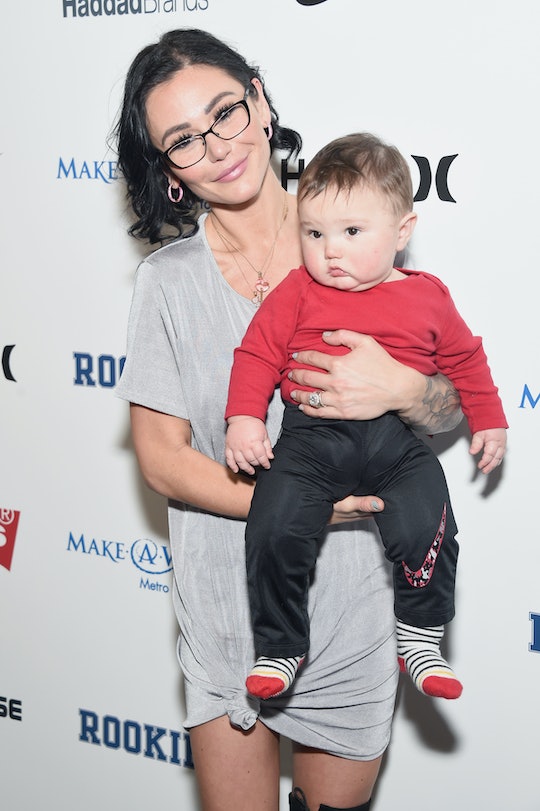 A diagnosis of autism can feel overwhelming to parents, but one celebrity mom has taken the news as an opportunity to share the joy she feels over her young son as well as his inspiring journey. Over the weekend, for instance, Jenni “JWoww” Farley shared an update about her son following his autism diagnosis and it was filled with all the happiness of any parent who is watching their child succeed.

The proud mother of two posted the update to Instagram as a video of her son, Greyson, in their home. Decked out in Incredibles-themed pajamas, the little boy repeats colors after his mom says them. “Red,” “yellow,” and “blue,” he repeats after his mom.

“The way he says yellow makes my heart explode,” JWoww captioned the video, with a yellow heart emoji.

On the Aug. 23 episode Jersey Shore: Family Vacation, viewers learned about Greyson’s developmental delay, according to E! News, which made this week's news so exciting for Farley and her fans.

“Yellow is usually a hard word but it sounded perfectly clear,” one fan commented on her post.

Others sent encouragement through their own stories. “My best friend [sic] son didn’t start talking until he was in kindergarten. Now he has his masters and married with a kid,” one commenter shared.

Farley’s estranged husband Roger Mathews — whom she filed for divorce from in September, according to People — also recently celebrated his son’s achievement with an Instagram post of his own. In his post, Greyson played with colored balls and announced their names perfectly several times.

“The sky is the limit for this kid. Red, Yellow, Blue,” Mathews captioned the sweet video.

Farley was excited to share her son’s positive growth in her interview with Hollywood Life. “He’s made leaps and bounds when it comes to speech. He’s understanding words better which was his issue. Not that he couldn’t speak, but he would never know what his shoe is or if you said, ‘Greyson,’ he actually didn’t even know his name at one point until he was a little over two,” she told the news outlet. “So now that he’s understanding simple words, he’s come so far."

The proud mom revealed that progress had been slow, with Greyson only recognizing the color blue for over a year. But things picked up speed and within two weeks, he’d learned green, yellow, and red, according to People.

She also spoke to Us Weekly about her commitment to Greyson’s therapy appointments and how that impacted her working schedule. She initially didn’t think she’d be able to participate in Jersey Shore: Family Vacation, but the production has been supportive of her needs.

On Nov. 30, she shared an Instagram post of Greyson working with his ABA (Applied Behavior Analysis) therapist, saying he’d been doing the therapy for six months and "is doing amazing."

Farley's openness is refreshing and her strength is admirable, and little Greyson, well he's pretty impressive. Hopefully, whenever she feels comfortable doing so, JWoww will share even more of these touching updates and milestones with her fans.