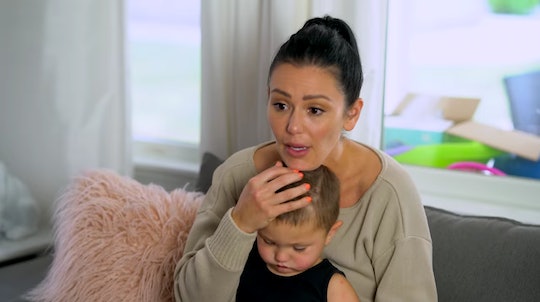 Although it might be hard to believe — considering their wild, party scene lifestyle in the past — several members of the original Jersey Shore cast are now married and/or have children. Among them is Jenni "JWoww" Farley, who has two young children, Meilani, 4, and Greyson, 2, with her husband Roger Mathews. Farley revealed on a recent episode of Jersey Shore: Family Vacation that her youngest child isn't talking yet, and is going to therapy three times per week in order to help catch him up to speed. On Monday, the mom of two posted a video on her YouTube channel detailing their journey. And JWoww's update on her son's delayed speech development is an honest look at their struggle.

Following the initial revelation of her son's struggles, JWoww took to Instagram to thank fans who sent messages of support, as E! News reported. The mom of two posted a photo of herself and Greyson, while also sharing, "To find out Greyson is 'behind' or 'delayed' crushed me... but only for a moment," she wrote. "That moment came from wanting to have 'perfect children' and 'how could this happen to me?'... but Grey is PERFECT and it CAN happen to anyone."

She continued, "I saw that last night when the messages came in by the hundreds. I decided to share that side of my family on Jersey Shore because I want to help anyone going through what I’m going through... I’m sure people need support the way I’ve needed it."

On Monday, Sept. 10, Farley posted a new video to her YouTube channel providing an update to fans on Greyson's progress, as People reported. She began the six-minute video by explaining why she had stopped regularly posting updates of her son. “One of the biggest reasons was because Greyson wasn't hitting his milestones the way other kids were supposed to. Another reason was because he wasn’t and still isn’t understanding a lot of words.”

She went on to say that she has received thousands of messages via Instagram, Facebook, and Twitter, with parents saying their kids have been, or are in, similar situations. Farley also admitted that she doesn't sleep well at night because she's "Googling like a maniac everything and anything that's going to hep Greyson," according to E! News.

One of the biggest takeaways from Farley's new YouTube video is that she plans to continue sharing Greyson's journey. "I truthfully want to keep it going. I think sharing stories and educating each other is one of the best ways to break a stigma," she explained. "I think there's a stigma when it comes to your child hitting developmental parts on the chart that they're supposed to hit. And if they don't, then they're this or they're that." She continued:

To end her video, Farley invited fans to write in with their questions at the following address: greysonvalor@gmail.com.

Once again, Farley's Instagram followers showed up to offer their support and own experiences with having children with speech delays. "Yah Girl! Fight the stigma! 💪🏼" one follower commented, "Keep on sharing your journey so that everyone can be educated.❤️❤️"

Another Instagram user wrote, "🙌🏻🙌🏻🙌🏻🙌🏻 my son is almost 2.5 and doesn’t speak either. He is also in early Intervention for PT, OT, Speech and DI. Completely can relate to what you are going through. Hang in there mama! I’m so happy you shared your story."

Yet another follower shared, "I've been where you are with my now 16 year old and early intervention is the best thing you can do for your child, it's so important!"

Personally, I think it's awesome that Jenni Farley is using her platform to raise awareness and spread more information about speech delays in children. By sharing her journey with her son, Greyson, not only is Farley able to hear the experiences of parents who were once in her shoes — but as she said, she's helping to end the stigma surrounding developmental delays of any type. Because in the end, we're all just parents trying to do what's best for our kids.