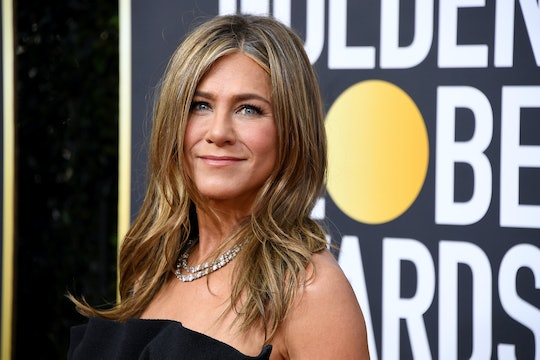 As celebs started arriving on the red carpet ahead of the Golden Globes on Sunday, viewers at home were watching and waiting for their favorite stars (Hi, Reese! Hi, Hot Priest!). One perennial fav is the woman formerly known as Rachel Green — because she looks good in errything and her hair never disappoints. As expected, Jennifer Aniston's 2020 Golden Globes' look was just gorgeous, and everyone agrees.

For starters, Aniston was nominated for best actress in a television series drama for her role as Alex Levy in The Morning Show. Her Apple TV+ series — for which she is also an co-executive producer alongside Reese Witherspoon — was nominated for Best TV Series Drama, as well. "I've been producing for the last 10 years," Aniston told E! News' Ryan Seacrest on the red carpet. "My partner and I, when we started our company, it was at that moment when we were not finding roles and the pieces of material that we felt excited about. So you take matters into your own hands and we are now at this moment. It's incredible."

Clearly, the 2020 Golden Globe Awards was a big moment for the talented actress and producer. Take a look at her classic, yet stunning, look below.

If you're not familiar with Aniston's signature red carpet look, the actress is basically a pro at rocking the black dress. And Aniston's black, ruffled ballgown slayed. She wore a strapless black Dior Haute Couture ballgown with ruffles at the bodice, People reported. Aniston accessorized her look with Cartier necklace, along with Fred Leighton earrings and rings.

Unsurprisingly, Twitter was completely in love with the actress' look. One Twitter user wrote, "A decade apart, but Jennifer Aniston still looks as stunning as ever!" alongside a side-by-side shot of the actress in 2010 and 2020.

Another Twitter user wrote, "Jennifer Aniston in Dior & a diamond necklace is the definition of “perfection”.

Yet another person tweeted, "Can I just say this? Jennifer Aniston is aging backwards. We stan an unproblematic queen!!! #GoldenGlobes."

Yep, there's no doubt about it: Jennifer Aniston came dressed to impress on Sunday night — and once again she did so with a classic black gown. Because hey, if it ain't broke, don't fix it.