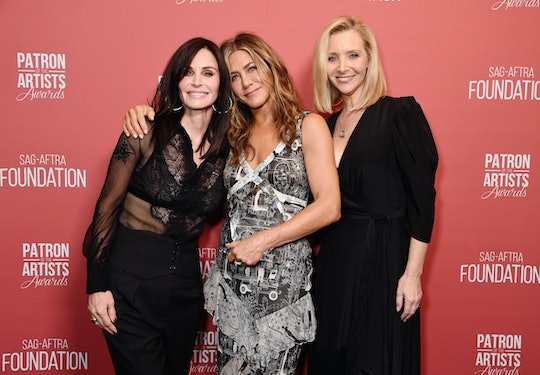 Jennifer Aniston Hosted A Mini 'Friends' Reunion For The Emmys

Along with putting out a literal fire earlier on in the night, Jennifer Aniston's Friends reunion at the Emmys was a high point for the uniquely entertaining award show. With COVID-19 keeping a live audience from bringing people together around good TV, celebs were forced to get creative this year. But Aniston didn't disappoint, bringing in a few old friends to celebrate the special night.

After appearing on stage with host Jimmy Kimmel and hilariously putting out the "dumpster fire" that is the Emmys during a pandemic, Aniston returned home to enjoy the rest of the show. The actress was nominated for Outstanding Lead Actress in a drama series for her role as Alex Levy in Apple TV+'s The Morning Show. This year's nomination marks her seventh overall nomination, and it has been 18 years since she won the Emmy for Outstanding Lead Actress in a Comedy Series for her performance as Rachel Green in the timeless, classic sitcom Friends.

And speaking of Friends, Aniston wasn't the only alum to make an appearance. Coming into frame with her, both Courteney Cox (who played Monica) and Lisa Kudrow (who played Phoebe) said their hellos to Kimmel. When he asked what the two of them were doing there, Aniston quipped that they had all been roommates since 1994.

For any Friends fan, all three leading ladies from the show spending an evening together enjoying the Emmys — at least before darting off camera because "dinner is ready," — is a sight for sore eyes.

Aniston's Horrible Bosses co-star Jason Bateman also briefly appeared on screen behind the women, to which Aniston explained that he was only living in the house with them "until he goes off to college."

While there was no purple door or yellow peephole frame in the shot, the three residents of 90 Bedford St. seemed to be as close as ever. The reunion was one of many touching moments throughout the 2020 Emmys, and something that this crazy year surely needed.