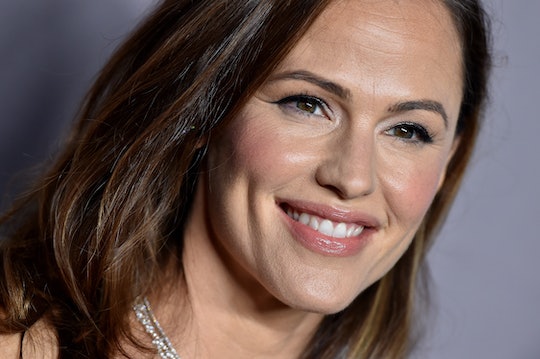 During the monotony of our lives in quarantine, there's nothing the world needed more right now than this incredible video of Jennifer Garner dancing in her laundry room with her cat and drinking wine.

Earlier this week, the actress shared a video of herself doing laundry and then breaking out into dance to the viral song "Think About Things" by Daði Freyer from Iceland. The video starts with Garner folding clothes with some music in the background, but once the beat kicks in, she can't help but start bopping along. She stands on top of her cabinets, puts on face masks, holds her cat (who takes a tumble), and drinks some red wine, all while bouncing along to the catchy beat.

"I don't know why, but I thought you needed this," Garner, who shares her three children — daughters Violet and Seraphina and son, Samuel — with her ex-husband Ben Affleck, captioned the video.

Garner's video is clearly a nod to the viral dance by Chicago stand-up comedian Garrett Williams. Back in March, Williams posted the original video of himself and his housemates on Twitter dancing to "Think About Things" and it went viral shortly after, with more than 7 million views. It's since inspired others like Garner to recreate it.

With over 4.5 million views since it was first posted on Tuesday, it's safe to say everyone certainly needed and appreciated Garner's take on the dance. Even her famous friends commented, like Ariana Grande who wrote, "U make me smile." Reese Witherspoon added, "I definitely needed this today."

This isn't the first time Garner has gotten creative during quarantine. In March, she has filmed an episode of her " pretend cooking show" to make English muffins. Garner has also used this time to help others, launching the Save with Stories initiative with actress Amy Adams. The actresses have inspired their celebrity friends to read children's books on Instagram to help entertain kids who are cooped up at home and raise money for Save the Children and No Kid Hungry. Needless to say, Garner is doing her part to brighten up people's days.