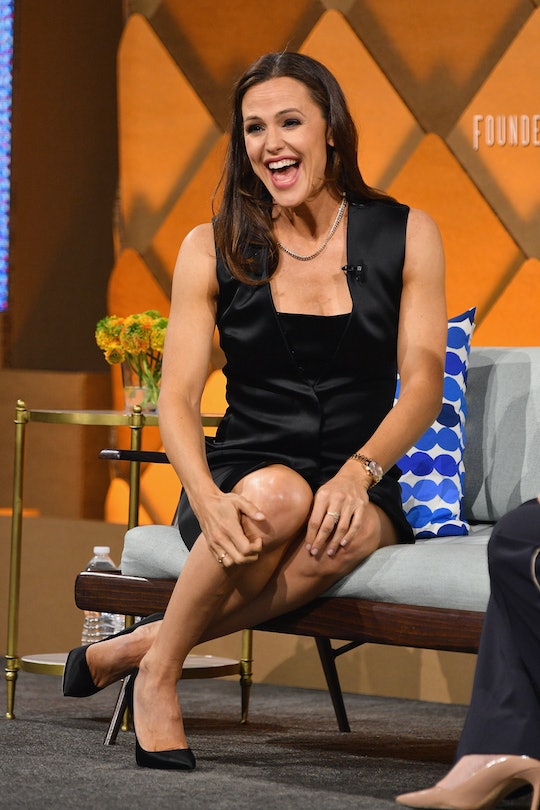 Moms, Jennifer Garner Hopes She'll Make Your Day With This Hilarious Note From Her 6-Year-Old

If you're a parent and you're not following Jennifer Garner on Instagram, then you're seriously missing out on some priceless parenting treasures. That's because this mama's photos about raising her three children are about as relatable as they come. From helping her daughter sell Girl Scout cookies outside of a grocery store, to proudly walking out in public with a 10-foot woven scarf her kid made, her posts will leave you nodding your head and thinking, "Same, girl. Same." Most recently, Garner got a hilarious note from her son, and parents, your kids have probably written you the same exact one.

For those who need a refresher, Garner has three children with her ex-husband, Ben Affleck: Violet, 12, Seraphina, 9, and Samuel, 6. Which means her youngest is right about at that age when he's learning to put his feelings into words on paper. And parents who've already been there, done that, know this can be an adorably hilarious stage. From interestingly-misspelled words, to brutally honest opinions and observations, you never really know what their teachers will be learning about your home life. And it seems as if the former 13 Going on 30 star got a kick out of Samuel's latest note to her.

Garner posted a photo of her son's letter on April 30, according to People, along with the caption: "In case Monday has got you down, focus on the little things that make you happy. #proudmom#ilovefarts#boymom." In little-kid handwriting, the note simply read: "I love farts." LOL. It's just too perfect.

One thing I'd like to point out, though, is this fascination with farts/poop/pee isn't unique to little boys. As a fellow mom of three kids — a 6-year-old son, a 4-year-old daughter, and 2-year-old daughter — I can vouch that plenty of little girls think farts and poop are just as hilarious. In fact, those were two of the first words my middle daughter learned to read because they made her laugh. I mean, I'm a grown woman and mom of three — and I still think potty humor is hilarious. But I digress ...

For the record, little Samuel is pretty much a pro at writing amazing notes. Because this isn't the first note of his that Garner has shared on social media, as Entertainment Tonight reported. Back in January, the actress posted an awww-worthy letter that read, "Hello, you are loved. I believe in you." Garner elaborated on Samuel's intentions in the photo's caption, writing, "When the librarian finds a love note your son tucked into a picture book." OMG, this kid! He not only loves farts, but he's basically the sweetest thing. (In other words, his parents are raising him right.)

Other totally relatable mom posts from Garner include one of the actress rocking a giant woven scarf made by one of her daughters, E! News reported. "When your nine year old weaves a 12ft long scarf on a peg loom for your birthday present, you’d better #werk. #fashionfriday#thecarpoollineismyrunway#proudmom"

Or when Garner posted a photo of herself selling Girl Scout cookies — as if she were like any regular, non-celebrity parent, as TODAY reported. "Why yes, kind sir, we do have Thin Mints," she captioned the snap. Ugh, yes. Working the cookie booth is essentially a rite of passage for parents, even if you are a successful Hollywood actress.

Aside from her mom posts, Garner has plenty of other entertaining treasures on Instagram. Like this tribute to her pet chicken, Regina George.

And this performance of "Happy Birthday" on alto sax.

As it turns out, Jennifer Garner is a person of many interests and talents. So yeah. If you're not currently following her Instagram, I implore you to do so ASAP. Because between her kid posts, her quirky hobbies, and her amazing sense of humor, she's the epitome of #momgoals.