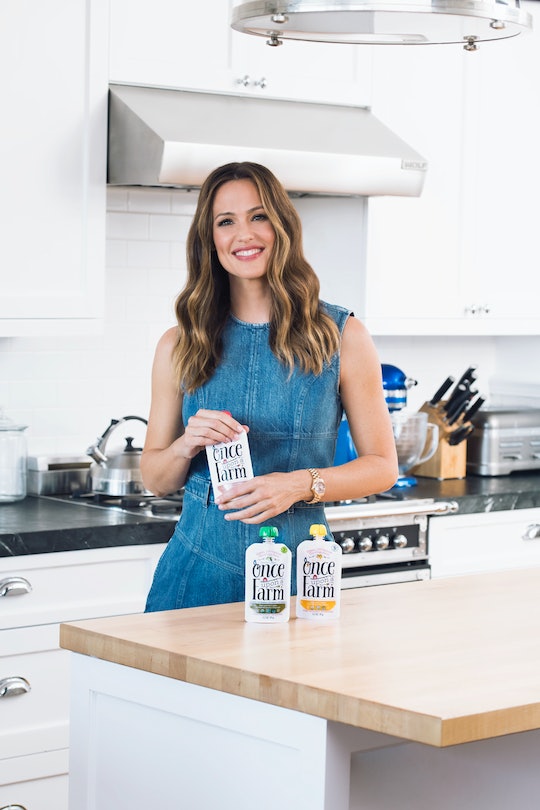 She’s fresh off the premiere of her action movie, Peppermint. HBO’s Camping, a short-run series in which she plays the central character, type-A Kathryn, premieres in mid-October. Star on the Hollywood Walk of Fame? Check. On the family front, she’s just back from an end-of-summer trip to Sweden with eldest daughter Violet, 12. With three kids and all the balls she has up in the air, why choose this season of her life for Jennifer Garner to partner in an organic foods company serving babies and toddlers?

More Like This
18 Best Sand Toys In 2021 For Babies, Toddlers, & Kids
15 Face Masks For Kids That Are Cute, Comfortable, & Get The Job Done
Vaccine Shedding Is Not A Thing, Experts Say
When Can Babysitters Get The COVID-19 Vaccine?

Because she’s for real. As in one of the most genuine, down-to-Earth Hollywood actors you’d ever like to meet, and an advocate for fresh-from-nature fruits and vegetables like those found in the purées and smoothies from Once Upon a Farm, the company in which she’s a partner.

“Authentic” is a word that gets tossed around a lot these days, but when it comes to Garner, it sticks for good reason. I’ve known her family since she was just a few years older than Violet is now, having had an opportunity to observe the self-professed “band geek” while we were in high school and I was haphazardly twirling a baton with her elder sister, Melissa. So here’s what every George Washington Patriot wants you to know: Jennifer now really isn’t so different from Jennifer then. She’s funny, sincere, and warm. She’s true to her roots, a frequent visitor to our hometown of Charleston, West Virginia, and she says that her mom, Pat, who “grew up on a little farm in Locust Grove, Oklahoma and was always connected to the earth and what we were eating,” still does much of her shopping at the farmer’s market that’s just blocks from our state capitol. At the end of the day, it’s that ingrained authenticity that’s the hallmark of Once Upon a Farm, driven by what Garner says drew her to the brand in the first place — its people.

“When I met my fellow co-founders, Cassandra [Curtis], Ari [Raz], and John [Foraker], I was immediately drawn to their passion, creativity, and sense of purpose,” she says. “When we first met, we spoke for hours about how we wanted to build a brand that would not only help families, but really drive social impact and change. The product is obviously amazing and a huge disruptor in the [infant and toddler food] category, but it’s the people that are ultimately the reason I decided I needed to be a part of this beautiful brand.”

As a mompreneur and working actor, Garner says her struggles are much the same as other working moms — she just has more help — and she says she’s learned a few things along the way as her kids have gotten older. “I try to make mealtimes enjoyable and stress-free — just a time to connect as a family over food,” says Garner, who’s mom to Seraphina, 9, and Samuel, 6, in addition to Violet. “I regret every time I counted bites or forced the issue — kids do not eat on our schedule. Low stress is best.” She says that the biggest tip she’d give young or first-time moms would be to get kids involved as early as possible in meal prep: “The more you can get your kids involved in the cooking process, the better. Whether it’s growing your own herbs or vegetables or just getting the kids to do some of the dinner prep work, the more involved and invested they are in mealtime, the more likely they’ll try what’s on their plate.”

Setting the tone for kids to try whatever’s on their plate starts early, when you’re first introducing new flavors, and the Once Upon a Farm blends — offered in pouches that provide flexibility and easy cleanup while also being eco-friendly — provide a stress-free and convenient way to do just that. Garner even dips into the fresh, cold-pressed, additive- and preservative-free stash herself from time to time – follow her on Instagram and catch her Pretend Cooking Show to see for yourself: “I’ll sometimes add the Mama Bear Blueberry baby food into my own smoothie in place of fresh produce, or use one of our applesauce pouches in place of butter or oil as I'm making muffins or cookies for my kids.” Yep, that’s how much she’s willing to stand by this baby food — she’s a grown woman, and she sometimes eats it herself.

In the interest of research I also tried some, and the difference from the usual bland pablum is noticeable. For example, the new Berry Berry Quite Contrary Smoothie tastes just like a PB&J sandwich. The variety of flavors in these blends is intriguing and one of the things that sets them apart from other foods for developing palates, which Garner says is intentionally targeted at helping shape adventurous eaters.

“I think incorporating a variety of natural and delicious nutrients and flavors into a child’s palate at an early age is important, because these are the foods that are shaping their taste buds and eventual cravings,” she notes. “I’d be lying if I said my kids always reach for the broccoli over the cookies, but if you keep making an effort to include new flavors and textures, especially at an early age, you really are setting up your kids for a lifetime of healthier eating.”

Don’t think she’s all sweetness and light, however. She does know how to walk on the dark side, and apparently from time to time, it takes the form of a popular sandwich cookie.

“I’m all about balance and would never deprive my kids of a good old-fashioned Oreo,” Garner says. “It’s really just about making sure they have good options to choose from, which is why we always have a kitchen stocked with veggies from our garden or fresh baked goods.”

“If they can choose, though, my kids hit the ice cream drawer pretty hard,” she adds.

On the regular, though, Garner is pretty insistent on healthy eating, just like her mom Pat was before her. The importance of nutrition in early life made such an impression on her that this was the mission she chose when making room in her busy life for Once Upon A Farm. And, on a larger scale, she’s put her leverage and her voice as a celebrity to work on behalf of this pursuit through her affiliation with Save the Children as an Artist Ambassador — a role very near and dear to her heart, especially as a daughter of Appalachia.

“I have visited a lot of families in rural America, and unfortunately, so many kids just do not have access to fresh organic food,” she acknowledges, in discussing a situation we’re both all too familiar with. “I have personally advocated for this issue in the government at both the state and national level, but now with the rest of my team, we’re on a mission to provide fresh foods that are accessible to everyone. It’s definitely a long-term goal but something we’re all very passionate about.”

That passion has carried her a long way, more than 2,330 miles from Charleston, West Virginia, to the Hollywood Walk of Fame. Now, she’s counting on it — and some delicious and cleverly packaged fruits and vegetables — to propel her latest venture, Once Upon a Farm, into the hearts and minds of moms across the country. Garner, as always, has got the goods.