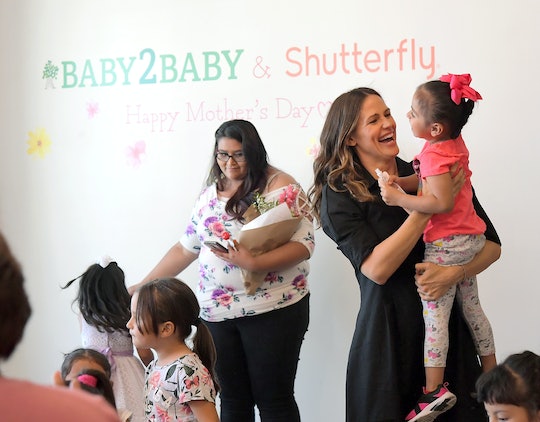 As an award-winning actress, Jennifer Garner is often praised for her work and success in front of the camera. But behind-the-scenes, Jennifer Garner is a tireless activist who supports families in need and champions the fight for accessible early education, regardless of parental income. At a Mother's Day event in Los Angeles on April 24, Garner hosted fifty deserving children between 3 and 5 years old as well as their mothers.

The day was filled with crafts, music, and fun for the group, provided by Baby2Baby, an organization that provides supplies to low-income families, and Shutterfly, online photo-printing company that supports its efforts. Garner, who works with Save the Children's U.S. programs and helps out with Baby2Baby's efforts as well, spent the entire afternoon decorating cupcakes with the children and dancing alongside them to hits like Taylor Swift's "Shake it Off." For some, it was like getting a glimpse into what life at home might be like for Garner's three children.

It was later I learned that Garner was already connected with some of the families at the event because she visits with them regularly. Once she had a chance to catch up with the kids and their parents, Garner took a few moments to chat with me about the issues that are so near and dear to her heart. Specifically, empowering rural families in need along with early childhood education.

"I work with Save the Children U.S. programs and we serve families who are growing up in rural poverty. I do stuff for Baby2Baby because they really get it. All of these families are from Save the Children programs in rural Los Angeles county," Garner tells Romper, detailing what makes Baby2Baby such an exemplary organization. "I know these families. I’ve been in their homes, I’ve been in their schools, I know the people who run the programs, I know the kids, I know the moms."

For Garner, the action-based work these organizations are doing have been a real "game changer." As Garner explained, "They don't just say they're going to help these moms — they change their lives. They give them not just diapers and supplies and back to school things that they would not have access to... car seats when there's a baby coming. Cribs, when they need a new crib."

Comparatively to other organizations out there, Baby2Baby is unique in that it works closely with Save the Children, pooling together its resources and time to help deserving families —a relationship Garner describes as having an "incredible synergy."

"What I love that they do is they’re specific. They’re specific about filling a need," the actress stresses. Then she shares some devastating information: "One out of three moms is choosing between feeding her baby and diapering her baby."

It's a chilling fact that many people don't think about when they think about those in need. Many people think of those in need of food, clothing, and basic every day needs — but not about whether or not there is an infant or toddler in the picture who also has needs.

Another part of childcare that Garner is heavily advocating for is making sure children have access to quality daycare and early education services. This is an issue many American families face no matter what their demographic may be, but Garner hopes to see that issue come to an end in the near future. How can we get there? Through politics, according to Garner.

"Yes, philanthropy is important, I spend a lot of time fundraising. But it has to be a public and private partnership. The government has to play a role. Policy-wise, we have to remember that a huge part of the country [is] not being touched. It’s kids, it’s families, it’s rural America, and it’s the poor."

When Garner isn't working towards achieving these efforts, she's balancing work and parenting her three children, Violet, 13, Seraphina 10, and Samuel, 7. And similarly to other parents out there, Garner has felt overwhelmed and stretched too thin at times. "Even with all of the help that I’ve benefited from through being a working mom and raising kids with great people around, I know that it’s still not enough," she says. "You can’t be everything."

There is no distinction, however, between Garner's activism and her experience as a mom. As a parent, the West Virginia native understands what families need to thrive, and along with Baby2Baby, Shutterfly, and Save the Children, she's making sure these kids and parents have the tools to succeed.